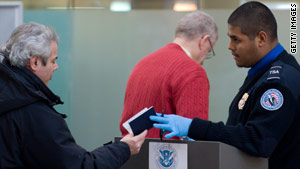 The former director of security at Israel's Ben Gurion International, considered the safest airport in the world, details what the U.S. can do better when it comes to keeping us safe. What does Israel do that the U.S. does not? "AC360," CNN tonight, 10 ET.

Washington (CNN) -- The most recent independent tests of airport checkpoints showed screener performance "falling off the charts," according to the top Republican on the House Committee on Transportation and Infrastructure.

Results of the tests, in which plainclothes agents tried to sneak bomb components past screeners, are classified, but Rep. John Mica, R-Florida, said they went "from poor to worse."

The tests were conducted at U.S. airports in late 2008 and early 2009 by the Government Accountability Office, the independent investigative arm of Congress.

"What shocked me, too, is that even with some improved technology, the performance wasn't that good," Mica said.

He said the test results were so alarming that he wrote to Secretary of Homeland Security Janet Napolitano to draw her attention to them. The test results and the recent attempted bombing of Northwest Flight 253 are a "loud wake-up call" about the aviation security system, Mica said.

Mica said the Transportation Security Administration has become top-heavy with administrators -- with a headquarters staff of 3,200, and 8,700 administrative and managerial personnel in the field, he said. He said the agency, which manages passenger security screenings at U.S. airports, should reduce management by 25 percent and transfer the positions to high-risk locations.

The suspect in the Christmas Day plot, which was foiled when the explosive failed to detonate properly, boarded the Northwest jetliner in Amsterdam, Netherlands, and originally cleared security in the Nigerian city of Lagos.

While the TSA sets standards for screeners and stations air marshals on international flights, it does not conduct passenger screenings overseas. Napolitano has said there was no air marshal assigned to the Northwest jet.

The TSA did not immediately respond to a request for comment on Mica's statements.

Mica also said Congress should change the process by which TSA administrators serve, noting the top job has been vacant for nearly a year and the next one will be the fifth in eight years.

The TSA has been headed by an acting administrator, Gale Rossides, since the departure of Edmund "Kip" Hawley at the end of the Bush administration.

However, the nomination has been held up by Sen. Jim DeMint, R-South Carolina, who fears that Southers will allow airport screeners to engage in collective labor bargaining.

In a statement, DeMint called the Flight 253 incident "a perfect example of why the Obama Administration should not unionize the TSA and allow our airline security decisions to be dictated by union bosses."

"Today, the TSA has flexibility to make real-time decisions that allowed it to quickly improve security measures in response to this attempted attack," DeMint said. Collective bargaining will hurt the agency's agility, he said.

DeMint said that organizing TSA employees may leave administrators unable to reward exceptional screeners and fire those who are under-performing, or adjust protocols as emergency situations arise.

Senate Majority Leader Harry Reid, D-Nevada, will force a vote on the nomination when the Senate returns from its Christmas break in January, Reid spokesman Jim Manley said Tuesday.

"In light of this weekend's incident, it's obvious to everyone that we need to get [TSA] leadership in place as quickly as possible," Manley said.

In response, DeMint welcomed a debate on the Southers nomination.

"I hope this critical debate and the Christmas bomber incident will convince Reid and President Obama that we cannot give union bosses veto power over national security at our airports," DeMint said in a statement to CNN.

The group cited the cooperation by union members of the New York City police and fire departments after the September 11, 2001, terrorist attacks.

"This is not an issue of security. There is no evidence that labor rights have any effect on transportation security officers," AFGE spokeswoman Emily Ryan said.

The AFGE represents 12,000 of the TSA's nearly 40,000 transportation security officers in many personnel matters, while also overseeing the broader collective bargaining of nearly 40,000 other government employees at the Department of Homeland Security, including the Coast Guard, Immigrations and Customs Enforcement and the Federal Emergency Management Agency.