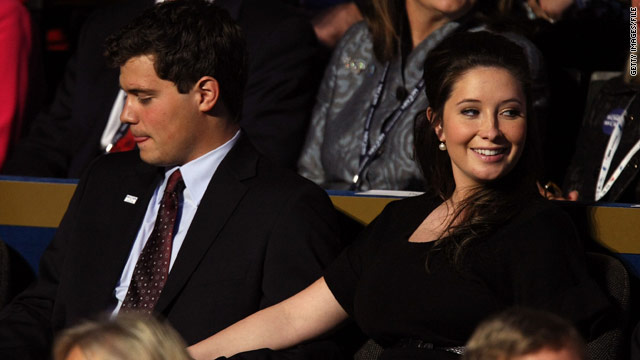 Levi Johnston joined Bristol Palin and her family at the Republican National Convention in 2008.
STORY HIGHLIGHTS

(CNN) -- An Alaska judge has denied Bristol Palin's request that her court fight with ex-boyfriend Levi Johnston over custody of their son be kept private to avoid a "media circus."

The daughter of former Alaska Gov. Sarah Palin is seeking full custody of 1-year-old Tripp, contending that Johnston is too immature to be a responsible father and that his mother's felony drug conviction makes her a danger to the child.

Bristol Palin filed for full custody in November, but Johnston is seeking shared custody. Both parents are 19. Their teenage relationship fell under an intense public spotlight after Sen. John McCain picked Sarah Palin as his vice presidential running mate in August 2008.

Johnston joined the family at the Republican National Convention after the campaign confirmed that Bristol, then 17, was five months pregnant with his child. The couple broke off their engagement about two months after their son's birth in December 2008.

Johnston has asked that the case conducted in public to protect himself from Sarah Palin, whom he said was "powerful, politically ambitious and has a reputation for being extremely vindictive." But Bristol Palin's request that the case be sealed said public proceedings "will turn this custody case into a media circus which is not in Tripp's best interest."

"In this day and age of the Internet, media stories remain available for years, even decades, after they are first published, and anything printed in the media (whether it is true or not) will be available to Tripp when he is old enough to read," Palin said in a sworn affidavit.

She said Johnston wanted a public case so he could "continue to make a spectacle of this custody dispute for his own self-promotion." Johnston was set to take part in a reality show in Alaska, she said.

"I do not believe that it would be in Tripp's best interest for Levi's reality show to be filming this case as it unfolds, or for Levi Johnston to be capitalizing off of this custody case through his reality show," Palin said.

Johnston's sworn statement said he feared what Sarah Palin might do against him if the case were kept secret.

"I really think that closing the court could make this matter very uncivil and potentially open the door for poor influences on Bristol and her attorney that may be extremely inappropriate and potentially harmful to Tripp," he said.

While Johnston said his former girlfriend would never be malicious toward him, "her mother is powerful, politically ambitious and has a reputation for being extremely vindictive."

"So, I think a public case might go a long way in reducing Sarah Palin's instinct to attack and allow the real parties in this litigation, Bristol and I, to work things out a lot more peacefully than we could if there is any more meddling from Sarah Palin," Johnston said.

Bristol Palin's affidavit said her mother is not involved in the custody case, except as a grandmother. But Johnston's lawyer, Rex Butler, said in his own affidavit that his client does not trust closed proceedings because "Sarah Palin is known to deal forcefully with those she perceives as political enemies."

"He feels Sarah Palin, through her lawyer, under the guise of Bristol Palin's name, would run roughshod over his very bones," Butler said.

The judge's ruling, signed last week, concludes that Bristol Palin "failed to demonstrate that this case involves 'matters of a sensitive and highly personal nature' of such a magnitude that 'protection of the party's name outweighs the public's interest in disclosure.' "

Her filing for full custody argued that Levi was "not ready for the demands of parenthood and the sacrifices that would entail to a 19-year-old aspiring actor/model."

"Levi remains without a regular job or steady source of income," the petition states. While he's not enrolled in school "to learn a trade or earn a degree," he has made money by selling stories about his son and the Palins to news outlets and engaged in "risque modeling for Playgirl magazine," it states.

The petition cited a series of messages posted on the online social network Twitter.com as evidence that Johnston "may have substance abuse issues, based on statements he has made about seeking 'weed.' "

Johnston's response said he does not have a Twitter account "and has made no such statements about the use of marijuana."

But Palin's harshest attack was on Levi's mother, Sherry Johnston, who pleaded guilty to a felony drug charge earlier this year.

Palin asked that the paternal grandmother be barred from having any unsupervised visitation with Tripp. Her petition said she "may re-offend, keep medications around the house which could be accessible to the baby, have illegal drug users come to the house (or she could take the baby in her car during a drug sale)."

Palin also said that since Sherry Johnston "could fall asleep or be too drowsy to appropriately monitor the baby."

Johnston's response said his mother's "chronic pain condition is currently being managed in coordination with the Department of Corrections."

"Sherry Johnston will not be left to take care of the minor child alone, but will simply be there to assist to the best of her ability," Johnston's filing said.

She was released from an Alaska prison last week to serve the remainder of her three-year sentence under house arrest at her home in Wasilla, Alaska. She must wear an ankle bracelet for electronic monitoring, Corrections Department spokesman Richard Schmitz said.