Retracing the footsteps of young Obama 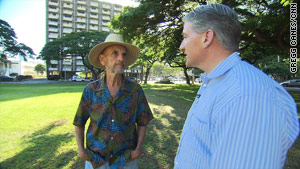 "Uncle Jack" Christensen takes tourists to some of the key sites in President Obama's early years.

Honolulu, Hawaii (CNN) -- Jack Christensen often walks away from the Baskin-Robbins with fewer followers than he had when he got there.

"We lose some people in there," Christensen told us with a smile. "They go in and start having ice cream instead of going on to the other stops."

To walk with Christensen is to retrace the steps of young Barry Obama, from the ice cream parlor where he worked in his youth to the nearby basketball courts where he developed his passion for the game.

"And they're important because they really show the environment -- that he had a great advantage over other inner-city kids where there's lots of graffiti and litter, and other problems," Christensen said of the courts. "And we have this wide open space in the sunshine and you realize he could play basketball almost any day of the year there."

At the moment, Christensen gives his walking Obama tour just one day a month. But he is switching to three days a month in the new year because of its popularity, which could grow even more now that the president is in Hawaii for Christmas break.

"Everybody gets really excited," Christensen said. "You know, 'local boy makes good' and the media plays it up and all that stuff. So it's a big event when he comes to town."

Christensen, or "Uncle Jack," as he prefers to be called, takes his Obama tour guests past the apartment building where young Obama lived with his grandparents.

Up the street is the hospital where Obama was born, and not too far away, the Punahou School, where he went to school and played on the basketball team.

"This is the heart of his adolescent development. This is the environment in which he got that great education,' Christensen says of the school. "You can tell from reading his books that he had really good English teachers at Punahou."

We visited the campus during a recent trip to Hawaii, and students and teachers at the school now call Obama an inspiration.

"You get this feeling I can do whatever I want, you know, nothing is going to really hold me back," said student Calla Chang.

Daniel Dangaran, enjoying a break from chemistry lab to talk with us, said there was no downside to Obama's success.

"It's definitely a motivation, I think, instead of something to be scared of or pressured. He just inspires all of us to dream big."

Kehaulani Kealoha-Scullion teaches social studies now and was a student at Punahou one year behind Obama.

"I was always at the basketball games and I remember that he was always a team player, and even if he didn't start the game, that he was with the team," Kealoha-Scullion told us. "I remember him being funny, you know, doing antics on the court before the game and warmups. That's what I remember most about him."

There is nothing on the school grounds making note of Obama's historic victory, though elsewhere on the island, it is easy to find examples of merchants looking to cash in on his fame and Hawaiian roots.

Souvenir shops tend to have shelves of Obama items, including a "dashboard doll" showing a bare-chested Obama carrying a surfboard and flashing Hawaii's trademark "shaka" sign.

Another shaka sign in downtown Honolulu gives a visitor a good sense of how Christmas here is a bit different from the mainland.

For 25 years, the City of Honolulu has had a big Christmas tree and light display. Inside the exhibit, there is a line waiting to see Santa -- but this Santa is wearing shorts. And outside, there is a giant Santa and Mrs. Claus display -- both have bare feet and are sitting by a pool of water. Santa is flashing the shaka as tourists line up for festive photos.

And, while the Obamas leave snowy Washington behind, and no doubt have memories of frosty Christmas celebrations in Chicago, the average Christmas temperature here explains Santa's shorts: mid-70s.