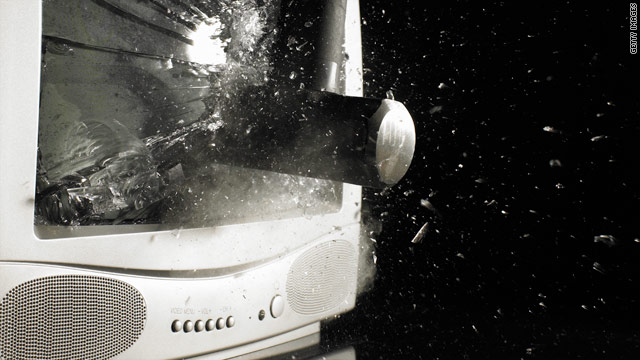 The bill directs the FCC to develop regulations preventing ads from being "excessively noisy or strident."
STORY HIGHLIGHTS

Washington (CNN) -- It's after dinner. You're tired. You ease yourself into a comfortable place to watch your favorite TV show. Suddenly you're jolted from your couch potato demeanor by a commercial break.

It's an ad for insurance or rum or a credit card -- and it's blaring, invading your calm and boosting your blood pressure.

A Democratic representative from California, however -- and her fellow politicians in the House -- find them more annoying than effective.

In her crusade to eliminate the nuisance, Rep. Anna Eshoo wrote the Commercial Advertisement Loudness Mitigation Act, or CALM, which mandates that TV commercials be no louder than the programs in which they appear.

Representatives unanimously passed the bill last month and sent it to the Senate for consideration.

The brief measure directs the Federal Communications Commission to develop regulations preventing ads from being "excessively noisy or strident" or "having modulation levels substantially higher than the accompanying program." The bill also addresses "average maximum loudness."

The volume of television commercials is a common complaint among viewers. One man told CNN, "Every time you put on the TV and try and watch a show, the next thing you get are these really loud commercials."

A woman added, "I usually mute the television."

"This is a dumb bill but I love it. I really do," said media analyst Mark Hughes. He said that for irritated Americans it strikes a nerve, even though it's not a huge political issue.

"It's important to people. And it's important in my household that I don't wake up the kids when they're sleeping, and I don't tick off my wife when she tells me to turn it down" because of a commercial's high volume.

Eshoo said she's been swamped with mail, e-mail and phone calls from people who have thanked her for the bill.

Political strategist John Ashford said there is some attraction to an issue that is manageable, as opposed to the complex issues Congress often struggles with.

"Having worked on Capitol Hill and now working in public relations, I know that when Congress can't solve big problems like Iraq and Afghanistan and 10 percent unemployment and how to implement this health care bill they are trying to pass, they turn to small problems like blasting television commercials."

Under the measure, advertisers and production houses would have one year to adopt technology that modulates and sets sound levels -- and apply it to TV commercials.

The FCC will do its part, a source there said.