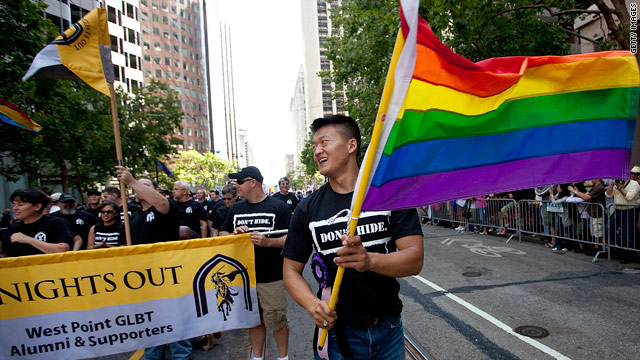 Washington (CNN) -- There's a constant fear that hangs over some service members deployed to a war zone -- and it's not necessarily the threat from insurgents or roadside bombs.

One Marine serving in Afghanistan said suppressing the truth about his sexual orientation is gut-wrenching.

"I do worry a lot about being outed and kicked out," he said in an e-mail to CNN. "So far the military has been my livelihood and my source of work/income for the past six years. I don't want that all taken away from me and me being discharged anything but honorably."

Others argue that those concerns are unfounded, pointing to other U.S. allies such as Great Britain and Israel which have openly gay and lesbian members serving in the military.

Don't ask, don't tell
In 1992, President Clinton suspended the military's policy which barred gay, lesbian and bisexual people from serving in the military.

The law says GLB members are allowed to serve unless they:
--Make a statement of their sexuality , publicly or even to family and friends (and are later turned in)
--Attempt to marry a person of the same sex
--Get caught engaging in a homosexual act

In 2005, a bill was introduced in the House to repeal DADT. The bill however did not have enough support to make it out of committee.

During the 2008 presidential election, then-candidate Barack Obama promised to end the DADT policy.

Obama, as president, has been criticized by GLB groups for not pushing harder to get the law repealed.

Military statistics indicate that from 1997 to 2008 -- over 10,500 service members have been discharged under the law.

"[I'm concerned] all the time, especially on the phone," the Marine said. "If I call with him, it's brief and just yes/no answers. When I am on Facebook, I'll view my gay friends' pages but most of them are supporters and have a lot of don't ask, don't tell headlines so I quickly scroll or minimize the page in case anyone next to me happens to peep."

Even in his e-mail correspondence to CNN, the Marine said that he was using an extra small font in case someone peeking over his shoulder could see the words on the screen.

And for other gay and lesbian service members, the burden of trying to communicate with a partner back home-- and also having to lie to their fellow troops about their sexuality -- weighs heavily on their psyche.

"I always joke around with people, but it's true: When you're in the military and you're gay -- deployed or not deployed -- it's like you're basically living a double life," said another Marine, who also requested anonymity. "When you're overseas, that double life really comes out."

The Marine, who has a partner, is back in the United States and on active duty.

Part of the double life can especially be seen in phone calls and e-mails.

Alex Nicholson, executive director for the nonprofit organization Servicemembers United said every day is a challenge for troops simply trying to keep in touch with their partners.

"It becomes a fact of life for gay and lesbian troops, especially on deployment. There are a whole set of concerns surrounding keeping your private life private when you're home. But those sort of exponentially increase when you're on deployment," said Nicholson, a former Army human intelligence collector who was honorably discharged in 2002 under don't ask, don't tell.

Nicholson added that the pressure of hiding a same-sex relationship while concentrating on a mission "becomes a nightmare for a lot of them."

The Marine back home said that while deployed, he would use initials or a nickname like "Cookie."

It's a similar story for Army National Guard Lt. Dan Choi, a 2003 West Point graduate and an Arab linguist who was recommended for discharge earlier this year after he came out publicly. Yet Lt. Choi remains active in the Guard while his case is under review.

"For me, I had to say 'my girlfriend' (when asked by fellow soldiers about his love life). That's what I was doing during the time I was on active duty," said Choi, who spent 15 months in Iraq.

"I wanted to tell my best friends about it and get advice from them. I referred to Matthew [his partner] as 'Martha' and I told all the right details ... so they were imagining a vivid picture but they could never see an actual picture of her or meet her."

The U.S. military's policy is that correspondence such as e-mails and phone calls are all subject to being monitored.

Army Maj. Dennis Swanson, a CENTCOM spokesman, said troops -- even before being deployed -- understand that anything could be monitored because of operational security fears.

"They are given a security briefing (before being deployed)," Swanson said. "So they can pretty much say what they want on certain things. We don't censor what they say, but they know that they can't say certain things that will give away troop numbers, locations."

Swanson said that the military doesn't necessarily monitor social networking sites, but does at times monitor calls and e-mails.

And the service members in the war zone are warned.

"When you turn the computer on it tells you 'hey, you are on a government computer and you're liable to be monitored at any given time,' he said.

But a large part of the fear for service members doesn't just come from being found out electronically or on a call, but from someone trying to get back at them.

Aaron Tax, legal director of the Servicemembers Legal Defense Network, said many of his clients have been outed by anonymous e-mails sent to higher-ups simply out of vengeance.

"That's primarily how we see don't ask, don't tell being used. Someone's angry at someone else and they have this information and they use it to out the service member," he said.

Since 1994, more than 13,000 gay and lesbian military men and women have been discharged under the don't ask, don't tell law, the Servicemembers Legal Defense Network's says on its Web site.

According to military statistics, between 1997 and 2008, more than 10,500 service members have been discharged because of the policy.

The nonpartisan Urban Institute in a 2004 report estimated there were nearly 65,000 gays and lesbians in the military, about 2.8 percent of those serving. The organization based its findings on the 2000 Census.

Choi recently received an e-mail from a lesbian service member who was targeted by an anonymous person.

"[She was told] that somebody looked through her computer and put the evidence together and slipped it under the superior's door," Choi said. "She became paranoid after that and she contacted me through a made-up Facebook account."

Civilian partners of those in Iraq and Afghanistan face some unique challenges, too.

"It's definitely one of the most difficult things I've ever been through. There really is no support. You feel all alone," said Brad, a partner of a service member who asked that his full name not be used because of the sensitivity of the subject.

Brad contributes to Servicemembers United's "Soldier's Husband" blog, which details what civilian partners face, including not being notified if a partner is killed in action.

For his part, Servicemembers United's Nicholson has spearheaded a new initiative geared toward civilian partners and the struggles they face.

The organization's campaign reaches out to civilian partners and connects them with others in the same situation.

In addition to its "Soldier's Husband" blog, Nicholson's organization has begun to set up a Military Partners Advisory Group to help partners -- and the GLB military community -- "do a better job of including and incorporating civilian military partners, especially when their active duty counterparts are deployed," according to SU's Web site.

"I didn't realize when I set up this initiative to help the civilian partners of gay and lesbian troops that there was going to be such a need for it," he said. "But since the word has been filtering out about this, we've gotten a number of partners involved in helping develop it and lead it."