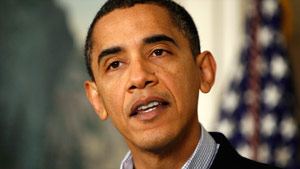 The procedural vote virtually ensures the bill's final approval by the chamber later this week. It would then be merged with the $1 trillion House version in what would be tough negotiations on President Obama's top domestic priority for 2009.

A final bill requiring approval from both chambers would not be completed until after Congress returns in January from its holiday break.

Obama hailed the Senate's overnight vote as an important victory for the American people.

"By standing up to the special interests who prevented reform for decades and who are furiously lobbying against it now, the Senate has moved us closer to reform that makes a tremendous difference for families, for seniors, for businesses, and for the country as a whole," Obama told reporters at the White House.

The influential American Medical Association, a traditional opponent of health care reform, announced Monday it supports the Senate bill. AMA President-elect Dr. Cecil Wilson joined Senate Majority Leader Harry Reid and other top Democrats to call for changes that Reid said would help provide health care for "all people, not just those who can afford it."

Video: Inside the Senate debate

The 60-40 party line vote -- cast shortly after 1 a.m. -- kept Senate Democrats on track to pass the bill on Christmas Eve. They needed every vote in their 60-member caucus for the supermajority in the 100-member chamber needed to overcome the filibuster, and some senators extracted beneficial provisions for their states before agreeing to support the bill.

Republicans have mounted a fierce campaign against the bill, using procedural tricks to slow debate and casting the measure as an unnecessary government intrusion into health care that will raise costs.

Obama rejected Republican claims that the bill would add to the federal deficit, noting the nonpartisan Congressional Budget Office reported the Senate plan would reduce the deficit by $132 billion over the first 10 years.

If a combined House-Senate health care bill eventually wins final approval from Congress and is signed by Obama, it would be the biggest expansion of federal health care guarantees since the enactment of Medicare and Medicaid over four decades ago.

Republicans ripped the Democratic majority for passing the measure in the middle of the night and accused Democrats of ramming the bill through despite growing public opposition.

"Make no mistake: If the people who wrote this bill were proud of it, they wouldn't be forcing this vote in the dead of night," argued Senate Minority Leader Mitch McConnell, R-Kentucky.

"Mark my words: this legislation will reshape our nation," he said. "And Americans have already issued their verdict. They don't want it. They don't like this bill, and they don't like lawmakers playing games with their health care to secure the votes they need to pass it."

The unusual timing of the vote was a consequence of Senate rules, the determination of Democrats to pass the bill before adjourning for the holidays, and the GOP's willingness to use every possible legislative tactic to slow the bill's progress.

Two more procedural votes this week also will require Democrats to win the backing of 60 members to break a GOP filibuster. Final passage of the measure, by contrast, will require a simple majority of 51 votes.

But compromises made to win the backing of moderate Democrats, such as Sen. Ben Nelson of Nebraska and Sen. Joe Lieberman of Connecticut, enraged many liberal Democrats and threatened to undermine support for the bill.

Liberal Democrats are particularly upset with Reid's decision to abandon a government-run public health insurance option and an expansion of Medicare to Americans as young as age 55 -- ideas strongly opposed by Lieberman and other centrists.

Top Democrats, however, argue that the Senate bill as currently written would still constitute a positive change of historic proportions. The legislation, according to the Congressional Budget Office, would extend health insurance to more than 30 million Americans currently lacking coverage while reducing the federal deficit.