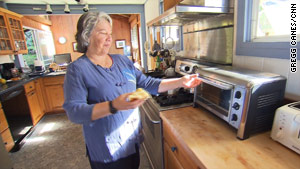 Susan Chandler has seen her monthly electricity bill fall from $100 a year ago to $36.

Honolulu, Hawaii (CNN) -- It was an energy audit at work that first nudged Susan Chandler to think green.

"The first thing I did was change all my light bulbs" to energy-efficient models, Chandler said during a recent visit to her Honolulu home. "Then I started tracking my energy bill."

She began walking into rooms her husband and son had just left to turn off the lights. A significant cutback in the use of the clothes dryer was another step. Still, Chandler said she wanted to do more.

Six solar panels were installed on the angled roof of her hillside home, which has a breathtaking view of downtown Honolulu, Waikiki Beach and the famous Diamond Head rock formation.

"We've got terrific tax credits in the state, as well as from the federal government, so it's not that expensive," Chandler said. "And I'm into just saving energy."

And into saving money.

Hawaii's electricity rates are the highest in the nation. A year ago, Chandler's monthly power bill topped $100. Her most recent bill was $36.

That's a big financial plus, but what Chandler said she enjoys the most is the evidence of how she is cutting her carbon footprint.

She makes a daily trip to a shed, where the solar panels are connected to an inverter box. An LED screen provides constant updates on how much power the panels are generating and how much in carbon dioxide emissions has been eliminated using solar instead of fossil fuels. Inside, there is another monitor on the wall in her home office, and she also can check a Web site to track both her production and her environmental impact.

"It shows you graphically," Chandler said. "They have these cute little things about how I've saved as much as if I was planting four trees, or not driving 415 miles. So you get to see each day what your energy production is."

She said, "Why everybody doesn't do this, I don't quite understand."

Chandler said more friends and neighbors are taking the initiative and finding ways to cut back consumption and find alternative energy resources. But she also said state, federal and international governments should do more than provide tax incentives for purchasing things such as hybrid cars or solar panels.

"I can't say that I can explain cap and trade particularly, " Chandler said. "But I'm certainly aware of the president going to Copenhagen, and I believe we have influenced climate change and that we definitely have to change our behaviors and our usage of energy so that we can reverse some of the damage that's done and not continue it. And, yeah, it's got to be a global effort."

Hawaii already is in the early stages of what it hopes will be an energy revolution.

At the moment, imported oil accounts for 90 percent of the remote state's energy needs, a major reason its electricity costs are so high. The state's ambitious goal is to generate 70 percent of its power from clean energy sources by 2030, and it is looking everywhere.

Solar is one component. State law now requires all new homes being built in 2010, at a minimum, include a solar system for heating hot water.

Biofuels is another, including fuel derivatives from sugar cane.

Water is yet another abundant resource that Hawaii sees as part of its energy future.

The company is in the early stages of a $200 million construction project that includes building pipes that extend nearly four miles off the Honolulu shoreline to extract ocean water, bring it to shore and then run it through miles of pipe onshore to cool roughly 40 of the downtown's largest buildings.

Wilkolak said it will be equal to or less than the cost of electricity now, with a major environmental plus -- offsetting about 178,000 barrels of oil a year.

Wind is another ample resource, though it took a spike in oil prices to the $150 a barrel range a few years ago to diminish the opposition to the 20-turbine wind farm that now sits on hillside conservation land overlooking Maui.

"That was very helpful to everyone's understanding of how important clean energy is," said Noe Kalipi, director of government and community relations for First Wind.

Some locals still don't like the nearly 200-foot high turbines, but to others they are nicknamed the "angels on the mountain."

The 20 turbines up and running have sensors that tell them to turn automatically to capture the wind in the most efficient manner. They run only part of the time because of technical issues related to Maui's electricity grid. Still, they provide power to 11,000 homes on Maui, roughly 9 percent of its power needs.

There are plans in the works to double nearly the number of turbines at the Maui location, and other wind farms are in the planning stages across the state.

"It is a very important piece of the future," Kalipi said. "Valid sustainability, valid tangible proof that we can harness robust renewable resources to be able to generate electricity for our use."

A new energy source, but this wind farm and those like it make only a modest contribution to what many -- including President Obama -- have predicted will be a "green jobs revolution."

About 200 workers were hired during the construction phase, but there are only seven full-time employees at the wind farm today, and three of those jobs are to make sure First Wind keeps its commitment to protect endangered species and upgrade and conserve lands on which the wind farm sits.

To see them up close is a fascinating glimpse at one piece of Hawaii's energy future -- and the nation's energy debate.

Each turbine has a computer station in its base that tracks its energy output and its maintenance needs. To get to the top requires climbing nearly 200 feet up a ladder in a cramped tubelike passageway. Near the top sits the massive turbine that generates electricity as the wind turns the giant blades.

And just a few more steps up from that is a hatch to the top, where, in this case, a visitor gets a bird's eye view of the neat line of turbines on a hillside and a spectacular panoramic view of Maui's breathtaking landscape.