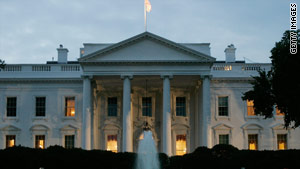 Hogansville, Georgia (CNN) -- A Georgia couple arrived at the White House on the wrong day for a tour recently and got much more than they bargained for.

After being screened by the Secret Service, Harvey and Paula Darden of Hogansville, Georgia, were led into a lavish invitation-only breakfast where they met the president and the first lady.

How the couple was able to get into the White House event without being on the guest list was called "dumb luck" by the Dardens. The White House is calling it a "nice gesture" and has been explaining how this incident is nothing like the breach of security that took place when Tareq and Michaele Salahi infamously crashed the Obamas' state dinner.

The Dardens got into the White House on Veterans Day, weeks before the Salahis' infamous party crashing. The couple mistakenly arrived a day early for a tour that was booked by their congressman.

The White House says it put the Dardens through the appropriate screenings and criminal background checks before allowing them to go to the Veterans Day breakfast because there were no tours scheduled that day.

Harvey Darden, 67, says the whole thing was a surprise to him because at the time he did not realize that he was at the White House on the wrong day.

Darden says he was standing outside the White House security booth with his 62-year-old wife when he heard: "Mr. and Mrs. Darden, you are cleared to come in."

They were led directly to the grand East Room where there was a buffet and a crowd of people, some in military uniforms, some in suits.

Darden says he began to get the sinking feeling that this was not the usual tour of the White House. He went to talk to a White House aide telling the staffer that he may be in the wrong place.

The staffer, who Darden did not know by name, asked him if he was a veteran. When Darden said he told the staffer he was a Navy veteran, the staffer told him to stay for the breakfast.

A White House spokesman said it was a "nice gesture" that has been done before for those have passed security screenings.

White House spokesman Nick Shapiro said it is not uncommon for staff to take people who are cleared for tours to other events if there is space available.

Shapiro said the White House Office of Public Engagement, which Obama created to engage citizens in White House activities, was responsible for clearing in the Dardens, as well as the other breakfast guests.

Secret Service spokesman Ed Donovan said agents performed the same screening procedures on the Dardens that were used for other breakfast guests. They checked the Dardens' names and did a criminal background check, steps that were not taken for the Salahis at the November 24 state dinner.

The Dardens ate breakfast and then were startled when Obama entered the room. They got a chance to meet the president, the first lady and the vice president, Darden said.

Darden said he was even more startled he returned to his Georgia home and read his e-mails with U.S. Rep. Lynn Westmoreland and realized he had been at the White House on the wrong day.

"It was dumb luck that a veteran of four years was able to meet the President of the U.S, who I have lots of support and respect for," Darden said.

CNN's Jason Morris and Jamie Crawford contributed to this report.