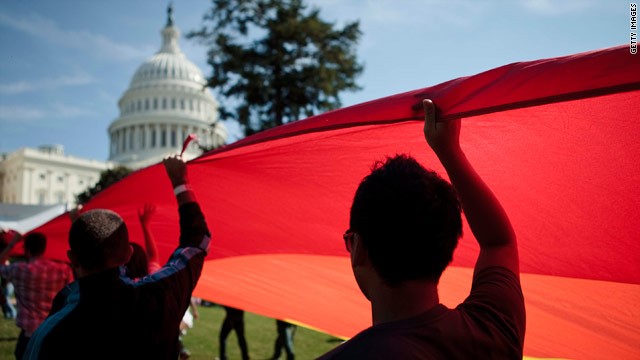 The bill was approved overwhelmingly by a vote of 11-2. The bill will be given to Mayor Adrian Fenty, who has expressed his support and vowed to sign the bill.

If the mayor signs it, Congress will have 30 days to intervene before it would take effect. It is considered unlikely that the Democratic majority on Capitol Hill will block the bill.

Tuesday's second vote was needed to send the measure to Fenty. The council passed the bill in an 11-2 vote December 1.

Council members who voted in favor of the measure hailed Tuesday's second and final vote as a historic moment.

The two council members who voted against the legislation, Yvette Alexander and former Washington Mayor Marion Barry, said they could not support it because the majority of their constituents did not.

Council Member David Catania, who is openly gay and who introduced the measure, said ahead of the vote that he understood the reason behind the dissenting council members' votes.

"They are my friends, and they are decent; this is simply a difference of opinion," he said.

Lawmakers in Maine approved legalized same-sex marriages this year, but voters in the state last month passed a referendum to overturn the new law.

Tuesday's vote in the nation's capital prompted approval from gay rights groups. The Human Rights Campaign applauded the passage of the legislation, calling it a "a victory for all D.C. residents."

"The legislation the Council passed today reinforces the legal equality and religious freedoms to which all D.C. residents are entitled," the organization's president, Joe Solmonese, said in a written statement.

The National Organization for Marriage, which opposes same-sex marriage, said "the fight is not over."

"Politicians on the city council are acting as if they have the right through legislation to deprive citizens of D.C. of their core civil right to vote, but we will not let them get away with it," said Brian Brown, the organization's executive director.

Opposition to the legislation also came from the Catholic Church's Archdiocese of Washington, which has said that the measure could restrict the church's ability to provide charity services, apparently because the church might cut back on services rather than comply with requirements.

"Under the bill, religious organizations would be exempt from participating in ceremonies or from teaching about same-sex marriage in religion classes and retreats in accord with their faith beliefs, but they would be required to recognize and promote same-sex marriage everywhere else, including in employment policies, and adoption and foster-care policies, against their beliefs," Archbishop Donald W. Wuerl wrote in a November 17 Washington Post opinion piece.

He said the church was asking that new language be developed so that faith groups "can continue to provide services without compromising their deeply held religious teachings and beliefs."

However, Mendelson said Tuesday that more than 200 churches have stated their support for the bill.

Last month, the district's board of elections ruled against a proposed ballot initiative that would have defined marriage as between a man and a woman.

"Under current law, the district recognizes as valid same-sex marriages performed in other jurisdictions," the board said in a written statement. "The board concludes that that Marriage Initiative of 2009 would, if passed, strip same-sex couples who have entered into such marriages of rights afforded to them by that recognition."