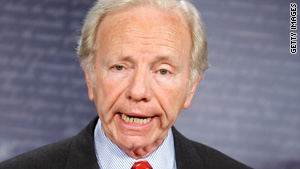 Sen. Joseph Lieberman says lowering the Medicare entry age to 55 would be too expensive.
STORY HIGHLIGHTS

Washington (CNN) -- Dashing the hopes of Democratic lawmakers Sunday, Sen. Joseph Lieberman signaled he would oppose a health care bill that includes a proposal to expand Medicare to people as young as 55.

The independent Connecticut senator has told Senate Majority Leader Harry Reid, D-Nevada, that he would vote against the Medicare at 55 proposal. He also said he would oppose cloture and work with the GOP if it ends up in the final version of the bill, two Democratic sources told CNN Sunday.

Unanimous Republican opposition so far means Senate Democrats need all 60 votes in their caucus, which includes Lieberman, to pass the sweeping bill.

Earlier, on the CBS program "Face the Nation," Lieberman and moderate Democratic Sen. Ben Nelson of Nebraska cited necessary changes to the bill before they would vote for it.

Lieberman outlined steps that he said would ensure the bill passes the Senate with support from Democrats and some Republicans. Forget about the government-run public health insurance option, Lieberman said, as well as the Medicare measure that was proposed last week as part of a package of alternatives to the public option.

We don't need to keep adding on to the back of this horse until the horse breaks down and we get nothing done.
--Sen. Joseph Lieberman
RELATED TOPICS

Lieberman's other conditions were eliminating a government insurance program focused on home health care for the disabled and strengthening cost-containment provisions.

"We don't need to keep adding on to the back of this horse until the horse breaks down and we get nothing done," Lieberman said.

However, Lieberman spokesman Marshall Whitmann said the senator first informed Reid on Friday that he had concerns about the Medicare 55 buy-in and "reaffirmed it today."

Reid spend the afternoon trying to get the 60 votes, according to the aide, who said Democrats still believe the Senate can produce a bill by Christmas but acknowledged that they might have to look elsewhere for the 60 votes.

Nelson said he cannot support the Senate bill without tighter restrictions on federal funding for abortion. The Senate last week defeated an amendment proposed by Nelson and two other senators that would adopt the tougher language contained in the House health care bill.

A compromise on the abortion language is possible, said Nelson, one of 10 Senate Democrats who negotiated in private last week to seek a compromise to the equally controversial public option.

The negotiators reached a tentative agreement on alternatives, including the Medicare expansion to people 55 and older who lack health insurance, as well as allowing private insurers to offer nonprofit coverage under government supervision.

Their agreement, hailed by President Obama and Democratic leaders as an important step forward, still must be analyzed for its total cost by the nonpartisan Congressional Budget Office.

Several Democrats said Sunday they would decide on the compromise once they get the CBO analysis.

"We do not believe this bill, this nearly 2,100-page monstrosity, is real health care reform," McConnell said.

Most Democrats support the public option as a nonprofit competitor to private insurers that would expand coverage and bring down prices. Republicans and some moderate Democrats, along with the health insurance industry, oppose the public option, saying it would be a first step toward a government takeover of the entire health care system.

The fate of the health care bill could hinge on the votes of as few as one senator from each party. If Democrats can get 59 of their 60 caucus members to support the bill -- for example, by changing the abortion language to secure Nelson's vote -- they can focus on gaining the vote of moderate Republican Sen. Olympia Snowe of Maine, who has signaled an openness to compromise.

If the Senate eventually passes a health care bill, its version will have to be merged by a conference committee with the House version passed last month. The final bill would then need approval from both chambers before going to Obama to be signed into law.

The president and Democratic leaders have said they want the bill completed this year. The Senate would need to finish its work this week to leave a realistic chance of meeting that schedule.