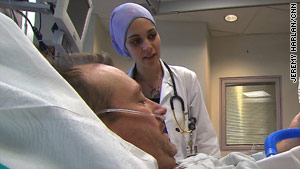 Denver, Colorado (CNN) -- Her bedside manner is comforting, the questions to the point.

"Is the pain about the same?" asks Dr. Taghrid Altoos.

"Yeah. Yup. Still right on the side, and it's getting a little better every day," a patient says.

Her residency now focuses on internal medicine, but Altoos is moving on to Chicago, Illinois, next to focus on radiation oncology, where she says she can join the fight against cancer. It is not what she envisioned when she began medical school at the University of Colorado at Denver.

"Initially, when I started medical school, I wanted to go into pediatrics," Altoos said. "So I did think about it. I did think about primary care. I know there is a shortage and primary-care physicians are needed, but I also think it is important to know what would be the best fit for you, and I thought radiation oncology was a better fit."

Five years ago, roughly half the doctors leaving medical school entered the work force as primary-care physicians; just 20 percent of current medical students are planning to work in primary care.

The shortage is evident everywhere, but is especially acute in rural areas.

Dr. John Belanger opened a clinic in Paint Lick, Kentucky nine years ago. Prior to that, the tiny community had not had a doctor for 40 years.

Belanger said from his early days he wanted to be a doctor who took care of everyone in the family. "When I thought of who a doctor was, that is what I thought of ... I enjoy doing a wide variety of things, the whole breadth of medical practice."

His clinic attracts a mix of patients from Paint Lick and the small towns and farmlands around it. Many are poor and most lack health insurance, but none is turned away for financial reasons.

"We have very low overhead and my salary is a lot less than the average family practioner," Belanger told CNN. "Our average cost is about $20 and we never turn anyone away because they can't pay. We feel strongly that one of the factors in all illness is stress. And if we compound someone's stress with financial problems, that is going against what we are trying to do as far as helping their health."

On the clinic door is a sign of the times: a notice that Belanger at the moment is not accepting new patients. One doctor can't meet the local demand.

"We're overwhelmed," Belanger says. "And we hate that. But at some point you have to go home."

He watches the health care debate in Washington with one major priority: incentives to make entering family and general practice more attractive -- and more affordable.

"People come out of medical school with huge debts, so that changes how they approach the rest of their lives," Belanger adds. "If doctors come out without the debt, they would be more inclined to go into the fields that don't pay as much."

Dr. Richard Krugman, vice chancellor for the Office of Health Affairs at UC-Denver, agreed that money is part of the appeal of choosing a specialty over primary care.

"If you are leaving medical school as our students do with over $150,000 of debt, that is going to affect a career choice," Krugman told us during a recent visit.

But he also sees other significant pressures beyond money.

"Most faculty at schools of medicine and most faculty everywhere are probably looking to make their students into craven images of themselves -- that is how you get rewarded. ... If 40 percent of the class goes into the specialty and you were the teacher, that' s pretty rewarding."

"They have primary-care experience for three years -- a half-day a week from the first month of medical school until the end of the third year," Krugman says. "Most schools stop at the end of the second. We keep it going."

Dr. Altoos gets help with tuition from her father and says passion -- not money -- is at the root of her decision to pursue a specialty. But she acknowledges some friends aren't so fortunate.

"It shouldn't be, but a lot of medical students do factor in the financial compensation of their specialty."

She said she knows some changes Congress is debating could significantly affect how doctors are paid. She says she isn't following the debate all that closely -- but not because she isn't interested.

"It did in medical school but not so much as a resident; we don't really talk too much about it," she said. "Too busy," she said with a laugh and a smile. "They keep us talking to our patients too much."