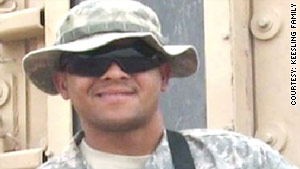 A photo of 25-year-old Army Spc. Chancellor Keesling, who shot and killed himself in Iraq.

Washington (CNN) -- The White House says its review of a long-standing policy not to send condolence letters to the families of military suicide victims should "hopefully" conclude "shortly."

White House press secretary Robert Gibbs said the president himself asked for the review, with Gibbs telling reporters at the White House briefing on Wednesday, "If the president didn't care, the policy would remain unchanged and unexamined."

The protocol dates as far back as the Clinton administration. But now, some military families, including the Keesling family of Indiana, believe the policy needs to be changed.

In June, 25-year-old Army Spc. Chancellor Keesling shot and killed himself in Iraq. His parents, Gregg and Jannett, eventually set up a memorial wall in their home, leaving space for what they thought would be a condolence letter from the commander in chief.

Military officials told the Keeslings that only the families of troops killed in combat receive such condolence letters from the president.

The Keeslings then wrote to both President Obama and Army Chief of Staff Gen. George W. Casey Jr.

In an October letter to Casey, Gregg Keesling explained why he wanted the policy changed.

"The lack of acknowledgment and condolences from the President, who our family admires greatly, leaves us with an emotional vacuum and a feeling that we his family have somehow [made] less of a sacrifice," Keesling said.

Last week, in a speech at West Point, as Obama laid out his new Afghanistan strategy, he talked about signing condolence letters "to the family of each American who gives their life" in the wars in Iraq and Afghanistan.

In an e-mail to CNN after the speech, Gregg Keesling said those words stung.

"I hope they are not trying to distinguish between 'give' and 'take,' " Keesling said, adding, "It was a good speech, but [I] am just so shocked the president used that language. It is hurtful to our family and the hundreds like us who has a soldier who has died by suicide in these wars."

Asked to respond to Keesling's comments, White House press secretary Gibbs said the first thing he and the president would say "is to thank that family for the courageous service [that] they exhibited on behalf of all of us in this country so that we might enjoy the freedoms that we have."

Gibbs added, "Regardless of what happens, nothing lessens the amazing contribution and sacrifice that's made. I think that's what the president would ... tell that family and would tell ... other families."