Dinner 'crashers' stood out years ago 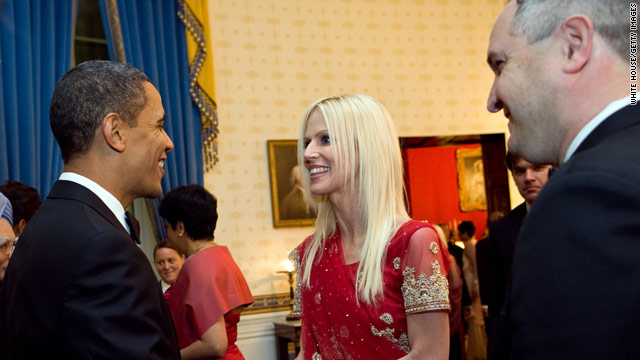 In a handout photo from the White House, President Obama greets Michaele and Tareq Salahi at the state dinner in November.
STORY HIGHLIGHTS

I met them a number of years ago. Yes, at a Washington party -- I don't think they were crashing that time, as they've been accused of crashing a White House state dinner in November.

Then it was a reception for a well-known Italian designer-type, one in which people put on the one item they own by that label, one that I'm a little embarrassed to admit to have attended.

At first, they seemed like a normal couple, but minutes into our conversation it became clear to me that there was something a little different about the pair.

At the time, there were no reports of Michaele's alleged misrepresentation of being a former Washington Redskins cheerleader, no cameras following them around as they tried out for a reality TV show, no questions about their charitable organization or other claims that have come to light.

But even then, something seemed odd -- they addressed me like they'd known me for years and that I would want to hear about the legal woes they were having with Tareq's mother. They dropped names, such as basketball star Shaquille O'Neal, the fabulous events they went to, the incredible things they did.

I knew or thought they were interested in talking to me for only one reason: I'd just told them I worked in television news.

Needless to say, they left a lasting first impression.

Years later, they would become a part of a seemingly never-ending story I would work on as a CNN White House producer. When I realized that this was the same pair I had met years earlier, I immediately forwarded the story to a friend who was with me at that first meeting with the words: "Holy cow." We both thought, "I knew it!" in reference to how we both understood that something was off at the time.

Beyond wondering how the Salahis managed to get into the White House, I really wanted to know what motivated this couple?

I called University of Georgia psychology professor W. Keith Campbell. He told me most people aren't expecting to be misled. He said people don't go to a party or go about their daily lives with the expectation of getting misled in any way. People normally take others at their word. You take for granted that in your daily life most people tell the truth.

"When someone who looks the part, with the way they're dressed, we don't want to call them out, you don't want to hurt their feelings," Campbell said.

But why would someone bend the truth?

Campbell, who co-wrote the book "The Narcissism Epidemic: Living in the Age of Entitlement," said a few different factors can come into play with this sort of behavior.

"What we know is people in reality television are more narcissistic than other people. It does seem attention-seeking [crashing a White House dinner]," Campbell said.

While he made the point that he is not a clinician and cannot diagnose the Salahis, he said that it seems that the pair's actions are in line with the condition.

They seemed to have "caused considerable harm to members of the U.S. Secret Service [three officers were recently put on administrative leave]," Campbell said.

"It sounds like behavior that is selfish, self-centered and destructive, which is consistent with narcissism."

The Salahis are up for roles in a reality television show, and Campbell said he thinks that could have played a role, too.

"It could be nothing more than good strategic marketing in the age of reality television," he said. "It seems effective; I know who they are; they are certainly more famous than I will ever be."

Self-promotion is also a quality that some say the Salahis possess, including Virginia Gov. Tim Kaine, who appointed Tareq Salahi to a six-year term on the state's tourism board.

"If somebody had said to me, 'Hey, some Virginians tried to crash a party and there are 7 1/2 million Virginians, who do you think it might be?' I think I might have been able to guess it within five seconds," Kaine said in a recent interview. "Because he's [Tareq Salahi] such a promoter."

"Historically, it was your talent that got you noticed; today that talent is to get noticed," Campbell said.

In the age of celebutantes and reality television shows, the public has a new standard and new pressures.

"There are people out there, we see in the press all the time, who want to get noticed. They do something unique and outrageous," Campbell said.

"People have to come up with something new and outrageous to get noticed, like pretending your kid got carried away in a balloon."

Campbell said the media is responsible for this new cultural phenomenon, too, because they need 24 hours of news and so are more likely to report on stories such as a runaway balloon or a couple crashing the White House. The news coverage fulfills the attention that these people crave.

"Status is a major part of society. In Washington there are a bunch of people jockeying for status, trying to get to the top of the status pile," Campbell said. "There are standard ways that people do that, like knowing the right people. This [party] crashing is just a different way of doing it. In a weird way, it's worked."

Whatever the motivation of the social-climbing duo, the Salahis will certainly provide plenty of cocktail conversation for your holiday parties. Just make sure you have an invitation before you walk through the door.