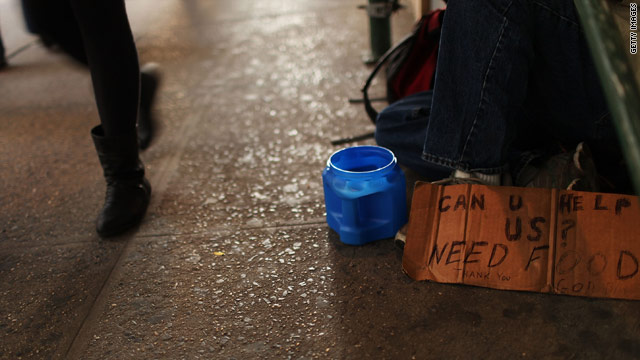 Washington (CNN) -- Two years into the recession, Americans don't see economic conditions getting better any time soon, and the steady growth in optimism that previous surveys measured throughout the year appears to have stalled, according to a new national poll.

A CNN/Opinion Research Corp. survey released Tuesday indicates that 34 percent of those questioned say that things are going well in the country today. That finding is 14 percentage points higher than a year ago but a dip of 3 points since November.

"This the first time in Barack Obama's presidency that this number has gone down," said Keating Holland, CNN's polling director.

According to the survey, 39 percent of the respondents said the country is still in a downturn, up 6 percentage points from last month. Nearly half of those questioned said the economy has stabilized and a small minority, 15 percent, think the country is starting to recover.

The poll's release comes hours before President Obama delivers a major speech on the economy at the Brookings Institution, one of the oldest and most prestigious think tanks in Washington.

According to the poll, 84 percent of those questioned said the economy is still in a recession, with 36 percent saying it's a serious one and another 35 percent calling it a moderate one.

What about the chances of the recession turning into another Great Depression?

"Forty-three percent say that might happen in the next 12 months, slightly higher than the number who worried about a depression a year ago," Holland added.

The CNN/Opinion Research poll was conducted Wednesday through Thursday, with 1,041 adult Americans questioned by telephone. The survey's sampling error is plus or minus 3 percent for the overall sample.