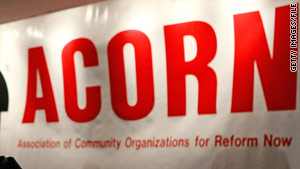 (CNN) -- Community organizing group ACORN needs wide-ranging reforms after an embezzlement scandal, but broke no laws when conservative activists posing as a prostitute and a pimp approached members in a videotaped "sting," an attorney's report concludes.

The videos led to the dismissal of four ACORN employees who appeared to offer advice to the couple and to federal legislation barring the group from receiving federal funds. But a review by former Massachusetts Attorney General Scott Harshbarger, who was hired by ACORN to examine the issue, found "no evidence that any action, illegal or otherwise, was taken by ACORN employees on behalf of the videographers."

"While some of the advice and counsel given by ACORN employees and volunteers was clearly inappropriate and unprofessional, we did not find a pattern of intentional, illegal conduct by ACORN staff," Harshbarger's report concludes. "In fact, there is no evidence that action, illegal or otherwise, was taken by any ACORN employee on behalf of the videographers."

ACORN, the Association of Community Organizations for Reform Now, was founded in 1970 to help the poor find government benefits and housing, but became the focus of conservative complaints as a result of its voter registration drives. ACORN has been accused of filing fraudulent voter registration forms in 11 states, and Sen. John McCain, the 2008 Republican presidential nominee, warned that the organization could be "destroying the fabric of democracy."

Most of the allegations concern fraudulent forms submitted by temporary ACORN employees hired to register voters in poor and minority areas. None of the allegations relate to fraudulent voting, and ACORN said it initiated a Florida investigation that resulted in 11 registration fraud arrests.

In August, conservative activists James O'Keefe and Hannah Giles dressed up as a pimp and prostitute and visited ACORN offices seeking advice on setting up a brothel, among other scenarios. They secretly recorded their visits on video and posted them on the Web site Big Government, leading to a media firestorm. The group also is still reeling from an embezzlement scandal that led to the ouster of its founder, Wade Rathke, in 2008.

Harshbarger's report found the videos to have been heavily edited. In one case, a voice was dubbed over the filmmakers' comments, "which makes it difficult to determine the questions to which ACORN employees are responding."

"A comparison of the publicly available transcripts to the released videos confirms that large portions of the original video have been omitted from the released versions," the report said. O'Keefe and Giles "either declined or ignored" requests to discuss their recordings, it said.

ACORN has sued O'Keefe, Giles and the Web site that first posted their videos, BigGovernment.com, accusing them of illegally taping. The Web site called Harshbarger's report a "whitewash" by a longtime Democratic ally.

"Well, ACORN retained a law firm to investigate its operations and, surprise, the law firm found that ACORN hadn't done anything wrong in the undercover videos filmed by James O'Keefe and Hannah Giles," Editor-in-Chief Mike Flynn wrote in a post on the site Tuesday.

But while criticizing the "pimp" sting, Harshbarger's report found the scenes depicted in the videos "represent the byproduct of ACORN's long-standing management weaknesses, including a lack of training, a lack of procedures, and a lack of on-site supervision." Leaders who took over after Rathke's removal have been unable to institute reforms "quickly and completely," and the report recommended nine steps ACORN needs to take to fix its internal problems and restore its reputation.

It urged the group, which has branched out into a variety of fields, to return to its "core competency" of community organizing; to replace its affiliate-dominated governing board with one made up mostly of independent members; to beef up its internal controls and accounting staff; and to hire an independent inspector general.

"The road map for reform is clear, but it will not occur overnight and will require perseverance and patience," the report said.