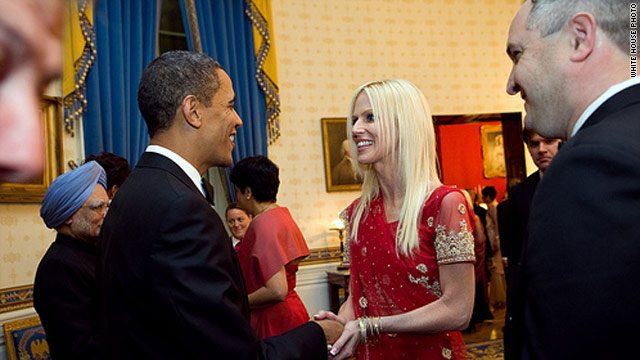 The Salahis attended a state dinner at the White House last month, even meeting President Obama, despite not being invited.
STORY HIGHLIGHTS
RELATED TOPICS

Washington (CNN) -- The media spotlight has focused on the brash couple who recently managed to attend a White House state dinner, but a U.S. Secret Service training document details 91 breaches of security between 1980 and 2003.

Secret Service spokesman Edwin Donovan confirmed the existence of the internal report, which was first disclosed in the Washington Post on Monday. Donovan would not provide CNN a copy of the report, but said it is a historical document that is used to help train agents in preventing and responding to breaches of security.

According to Donovan, approximately half of the security breaches involved people who jumped the White House fence and were immediately apprehended by Secret Service agents.

Only a limited number incidents, he said, involved direct contact with the president:

-- Last month, Tareq and Michaele Salahi were allowed into the White House for a state dinner in honor of the Indian prime minister despite not being on the official guest list. They were photographed greeting President Obama in the reception line.

-- And in 1994, Stephan Winick was able to sneak into a group accompanying actor Harrison Ford for a meeting with President Clinton in Los Angeles, California.

Donovan said that in all cases, the intruders encountered other levels of screening and security before meeting the presidents.

"Agents are always there by the president. We don't trust just magnetometers," he said.

In the past 30 years, Donovan said, there have been vast improvements in security around the White House complex and elsewhere, including the extensive use of cameras and other tactical elements.