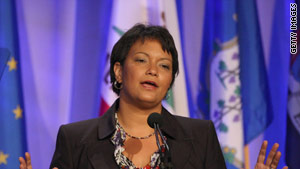 "The overwhelming amount of scientific studies show that the threat is real," she said.

The announcement stems from a Supreme Court ruling which ordered the agency to determine the impact of carbon emissions not only on the environment, but on public health.

"These long-overdue findings cement 2009's place in history as the year when the United States government began addressing the challenge of greenhouse-gas pollution and seizing the opportunity of clean energy reform," Jackson said.

Immediately after the announcement, Jackson was leaving for Copenhagen, Denmark, to participate in the Copenhagen Climate Conference ahead of President Obama's appearance at the end of the week.

Her statement could provide evidence to the conference that the agency and the Obama administration are taking global warming seriously.

However, Jackson said that Monday's announcement does not require any immediate regulatory action.

The Obama administration is pushing for comprehensive energy legislation from Congress that puts a price on carbon emissions, a so-called "cap and trade" policy that uses market forces as an incentive for businesses to reduce carbon emissions.

The agency made the announcement because it is required to issue an "endangerment finding" -- evidence that carbon emissions are dangerous to the public health -- before it can regulate carbon dioxide and five other greenhouse gases under the federal Clean Air Act.

The EPA said in April that it would likely make such a ruling regarding carbon emissions and public health. The agency completed a public-comment process before making the announcement.