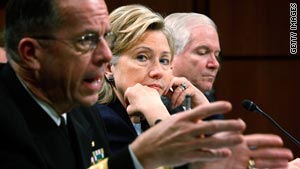 Washington (CNN) -- Top Democrats and Republicans questioned Thursday whether President Obama is too narrowly focused on problems in Afghanistan at the expense of other national security priorities.

They also amped up a bipartisan chorus of concern over the ability of the administration to adhere to its goal of starting a U.S. troop withdrawal from that country in July of 2011.

House Speaker Nancy Pelosi signaled major reservations about the new Afghan strategy, noting she has asked the White House to send its entire national security team to brief members of Congress about the plan.

"I think we have to handle it with care (and) listen" to what they present, she said.

"Over the last days I've heard a number of people saying that we are in Afghanistan today because that is the place from which we were attacked" on September 11, 2001, said Senate Foreign Relations Committee Chairman John Kerry, D-Massachusetts.

Kerry stressed the need to build on U.S. assistance to neighboring nuclear-armed Pakistan, which has been increasingly targeted by Islamic extremists.

"Much more discussion is warranted on whether the Afghanistan mission is so central to our core national security that it necessitates huge spending increases and the deployment of a large portion of our finite combat capability," said Indiana Sen. Richard Lugar, the ranking Republican on the committee.

"In essence, we have to ask whether the costs of this deployment are justified in our overall national security context and whether we are mistakenly concentrating our forces to fight a terrorist enemy in a specific location even as the global terrorist threat is becoming increasingly diffuse."

Lugar cited, among other things, the proliferation of terrorist cells across Africa, Europe and the Middle East.

He also agreed with Kerry that greater attention needs to be paid to Pakistan.

"The potential global impact of instability and a nuclear-armed Pakistan dwarfs anything that is likely to happen in Afghanistan," he said.

Obama's new deployment, estimated to cost $30 billion a year, will bring the total number of U.S. service members in Afghanistan to roughly 100,000. NATO allies are expected to add at least another 5,000 troops to the more than 40,000 they have already contributed to the U.S.-led mission.

The new strategy is designed to eliminate al Qaeda in Afghanistan and help the Afghan government defeat the Taliban insurgency, while also bolstering Pakistan's anti-terrorism efforts.

The latest strategy will be a "fiasco" that will lead only to more dead Americans, the Taliban insurgency said Thursday.

"Throughout the history of Afghanistan, the Afghans have not been subjugated through deceit, ploys, material power, troop reinforcement and military might of the foreigners," Taliban leaders said in a statement released Thursday. "Therefore, the reinforcement of the American troops and other tactics will not have impact on the status quo. But the reinforcement will provide better opportunity for the mujahedeen to launch offensives."

Clinton, Gates and Mullen all asserted that Afghanistan remains the central front in a global war on terror and is key to U.S. national security interests.

Sen. Russ Feingold, D-Wisconsin, voiced the attitude of many liberal Democrats by saying he is pleased Obama set a date to start a withdrawal, but is disappointed the president is escalating the U.S. presence without providing a firm end date for all American military involvement.

"I do not support the decision to prolong and expand a risky and unsustainable strategy in the region," Feingold said.

Mullen rebuffed one of the most common critiques of the date by asserting it is "not arbitrary at all." July of 2011, he pointed out, will be the third summer for U.S. Marines in Helmand province -- a base for extremists in southern Afghanistan -- "and we will have a clear indication (by that point) which way this is going."

The administration needs to "be honest with the American people," he said. "When I hear these dates, I believe they are as solid as quicksand."