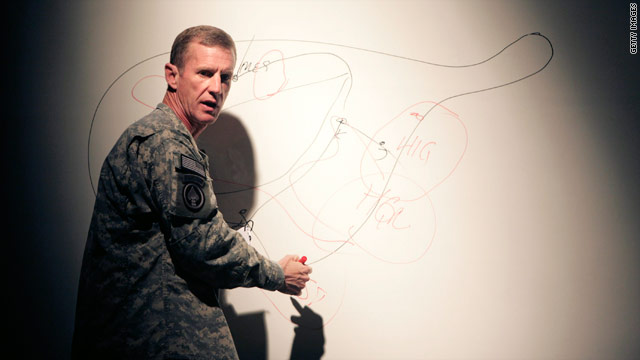 (CNN) -- A day after President Obama announced his decision to send 30,000 more U.S. service members to Afghanistan, the top U.S. general there talked optimistically about the road ahead to an audience of troops.

Speaking in the southern city of Kandahar, Gen. Stanley McChrystal said the emphasis will be in southern Afghanistan, where Taliban militants have a strong presence in places like Kandahar, Helmand, Uruzgan and Zabul provinces.

"What we are going to do now is be in tremendous position to go forward. I think we've got a foundation on which to build where we go forward. So I have exceptional confidence right now," he said.

McChrystal had asked Obama for up to 40,000 more troops. Obama came up with 30,000 to supplement the 68,000 Americans now in Afghanistan. The new troops would begin swiftly deploying early next year, and Obama said Tuesday he would set a goal of working to bring forces home in the summer of 2011.

The non-U.S. members of NATO intend to commit at least 5,000 more troops to Afghanistan, the alliance's top civilian leader said Wednesday, bringing the total NATO deployment to about 47,000 troops.

"We believe by next time this year we'll see a level of progress that will convince us that we can clearly articulate the progress and predict the effectiveness of our operations," McChrystal said. "I believe that by the summer of 2011 that will be obvious to all the players involved."

Despite the troubles in the Afghan elections, McChrystal sees silver linings in the process, lauding the fact that many people voted and helped the world focus on the exercise. The result is a "changed political environment."

But he said violence has spiked in recent years and confronting militants on the march is the crux of the fight.

"Our mission is to prevent the insurgency from being a threat to the government of Afghanistan and prevent al Qaeda or other international terrorists from using Afghanistan as a safe haven," McChrystal said.

Earlier, McChrystal held a videoconference for headquarters staff of the NATO-led International Security Assistance Force and commanders of American troops.

In a statement issued as Obama was announcing his new plan for Afghanistan, McChrystal said the president had provided him with a clear mission and sufficient resources.

The general said the situation had improved with the commitment of additional troops, giving the mission better clarity, capacity, commitment and confidence.

McChrystal cited what he called "one unassailable reality" about the war: "Neither the Afghan people nor the international community want Afghanistan to remain a sanctuary for terror and violence."

"As the U.S. increases its commitment, I am confident that the other allies, as well as our partners in the mission, will also make a substantial increase in their contribution," said NATO Secretary General Anders Fogh Rasmussen. "Taken together, the new force contributions from across the alliance, as well as the new approach agreed by all the ISAF countries, will help create a new momentum in the mission in 2010."

The nine-year-old war was sparked by the September 11, 2001, attacks on the United States by al Qaeda, which had been given haven in Afghanistan by the Taliban government. Nearly 3,000 people died in the attacks on New York and the Pentagon. Since being overthrown in 2001, the Taliban have been trying to regain strength in Afghanistan as well as in Pakistan.