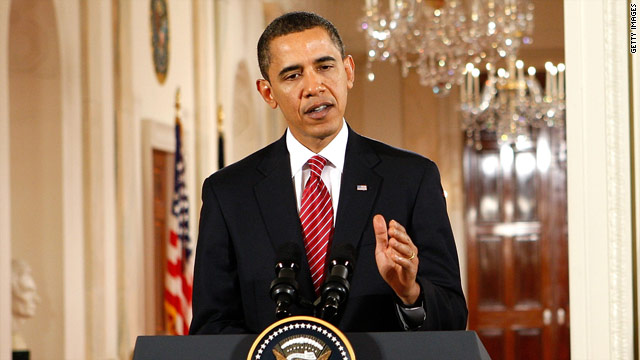 What is President Obama's decision on sending more troops to Afghanistan? Join the best political team on television for "Decision: Afghanistan" on Tuesday night starting at 7 ET.

On Tuesday, Obama will travel to West Point, New York, to announce his decision on a request by McChrystal for up to 40,000 additional troops.

Gibbs said the president's West Point speech will explain why the United States is involved in Afghanistan, the new American mission in the war-torn country and the process that led to Obama's decision.

Obama also will emphasize the limit on U.S. resources "in manpower and budget" and stress that the Afghan mission is "not open-ended," Gibbs said.

Obama previously ordered more than 20,000 additional troops to Afghanistan. Roughly 68,000 U.S. troops are in that nation, along with about 45,000 from the NATO alliance.

Clinton, meanwhile, has been working the phones since Thanksgiving to brief her counterparts on the plans, State Department spokesman Ian Kelly said Monday.

Kelly said the secretary's goal was not to brief them on specifics of the new strategy, "because, of course, that's being rolled [Tuesday]," but to give them the "general outlines" of what Obama will announce Tuesday night.

Clinton made 10 calls to foreign ministers on Thanksgiving and has made several other calls since. Kelly would not say whether she pressed any of those governments to commit more troops but said most of the discussions were about the need for "coordinating our efforts."

Speaking on background because of the sensitivity of the issue, a senior administration official said he thought Clinton "got a positive response" from calls to foreign ministers from countries that already are contributing troops to Afghanistan.

"They made clear they would do whatever they could, within their possibilities and abilities," the official said.

A defense official said last week that the military had planning under way to send three additional Army brigades, totaling about 15,000 troops; a Marine brigade, with about 8,000 troops; a headquarters element of about 7,000; and between 4,000 and 5,000 support troops -- a total of about 34,000 troops.

Major questions remain, however, about congressional and broader public support for a new military buildup in the more than eight-year war.

Obama is facing an increasingly loud chorus of disapproval from the liberal base of the Democratic Party. Some Democrats vehemently oppose any troop increase.

There also is concern about the dollar cost of the war. House Appropriations Committee Chairman David Obey, D-Wisconsin, recently proposed a special war surtax to finance the conflict.

"If we're concerned about our future and the need for a shared sacrifice, then this is just simply a common sense approach," Rep. John Larson, D-Connecticut, said Monday on CNN's "American Morning."

"The only people we're asking to sacrifice in this war effort have been the men and women who serve our armed services and do so valiantly. They deserve the same kind of commitment here at home from citizens."

Other Democrats, as well as Republicans, dismissed the idea.

"In the middle of this recession, I don't think you're going to be able successfully or fairly to add a tax burden to middle-income people," Sen. Carl Levin, D-Michigan, said Sunday on CBS's "Face the Nation."

Gibbs said Monday that he had "not heard extensive discussion" at the White House about a possible surtax.

"I know the president will touch on costs" during Tuesday's address, he said, but "I don't expect to get overly detailed [about that issue] in the speech."

Conservative congressional leaders also argue that tying the new troop buildup to a clear exit strategy would be self-defeating.

"Talk of an exit strategy is exactly the wrong way to go," Arizona GOP Sen. Jon Kyl said over the weekend on "Fox News Sunday."

"I certainly hope the president doesn't do that, because all that does is signal to the enemies and also to our allies, to the folks in Pakistan as well as the Afghanis, that we're not there to stay until the mission is accomplished."

Other Republicans warned, however, that public backing for the war might be wearing thin.

"The American people will not sustain a war in Afghanistan for five years or 10 years, in my judgment," GOP Sen. Richard Lugar of Indiana said Sunday on CNN's "State of the Union."

"We're going to have to take a look at what our own resources are, what our own troop levels are, whether we can continue to recruit enough people and what other things are occurring in the world at the same time."

U.S.-led troops invaded Afghanistan in response to the September 11 attacks on New York and Washington by the al Qaeda terrorist network. The invasion overthrew the ruling Taliban, which had allowed al Qaeda to operate from its territory, but most of the top al Qaeda and Taliban leadership escaped the onslaught.

Taliban fighters have since regrouped to the mountainous region along Afghanistan's border with Pakistan, battling U.S. and Afghan government forces on one side and Pakistani troops on the other. Al Qaeda's top leaders, Osama bin Laden and Ayman al-Zawahiri, remain at large and are suspected to be hiding in the same region.