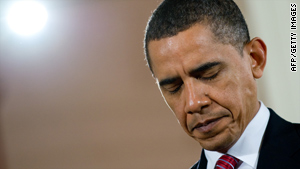 President Obama has said releasing the pictures "would pose an unacceptable risk" to U.S. troops in Afghanistan and Iraq.
STORY HIGHLIGHTS
RELATED TOPICS

Washington (CNN) -- The Supreme Court has ordered a lower court to re-examine an ongoing dispute over public release of photos apparently depicting abuse of suspected terrorists and foreign soldiers in U.S. custody.

President Obama signed legislation late last month to keep the disputed material under wraps. That executive action apparently prompted the justices to delay any consideration of the larger legal issues.

In a brief order Monday, the high court instructed the New York-based 2nd U.S. Circuit Court of Appeals to re-examine its decision earlier this year that the photos be disclosed. The photos -- more than three dozen images of Iraqi and Afghan prisoners -- were gathered as part of a military investigation into allegations that detainees held in Afghanistan and Iraq were tortured and physically abused.

The American Civil Liberties Union had filed a Freedom of Information Act request for the photos. The Bush administration denied that request, and the ACLU filed suit.

After the appeals court ruling, the Pentagon had been set to release the photos, as Obama had initially agreed to the release. But he changed his mind after private, intense urging against it by military leaders.

The ACLU criticized the administration's about-face, saying it made mockery of Obama's campaign promise of greater transparency and accountability, and damaged efforts to hold accountable those responsible for abusing prisoners.

A provision included in the Homeland Security Appropriations Bill, passed October 29 by Congress and signed by the president, grants the Department of Defense authority to withhold the photographs. Defense Secretary Robert Gates told the Supreme Court on November 13 that he was using his authority granted under the new law to stop the material from becoming public.

According to the government legal brief filed with the high court, several of the photos show "soldiers pointing pistols or rifles at the heads of hooded and handcuffed detainees." Other images described from military reports show prisoners in restrained and humiliating positions.

Military investigations led to criminal charges against some of the soldiers shown in the photos.

This group of photos is separate from the ones publicly released in 2006 showing abuse of Muslim men held at Baghdad's Abu Ghraib prison.

The 2nd Circuit Court of Appeals ruled in September 2008 that the latest photos must be released. Sonia Sotomayor, the Supreme Court's newest justice, had served on that appeals court until August but was not involved in that case. She also did not participate in the pending high court appeal.

The president this spring said releasing the pictures "would pose an unacceptable risk of danger to U.S. troops in Afghanistan and Iraq."

In court documents filed last spring, Gen. David Petraeus, the top U.S. commander in the region, argued that public access would have a "destabilizing effect" on Pakistan and other U.S. partners in the battle against the al Qaeda terrorist network.

Forty-four photos are covered in the ACLU request for disclosure, but others could be released under the earlier appeals court ruling.