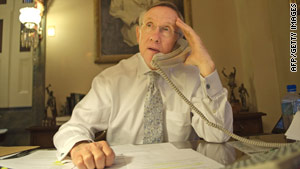 Washington (CNN) -- With Republican opposition unanimous so far, the Senate debate starting Monday on a comprehensive health care bill will focus on bridging differences among the majority Democrats.

Senate Majority Leader Harry Reid of Nevada managed to hold together his 60-seat Democratic caucus to overcome a Republican filibuster and launch debate on the $849 billion Democratic proposal that would expand health coverage to 31 million more Americans. Reid also will need 60 votes to eventually close the debate, expected to last several weeks, and his ability to secure that support remains uncertain.

"The Democratic base expects, as we say, change you can believe in," former Vermont governor and Democratic National Committee chairman Howard Dean told "FOX News Sunday." "Harry Reid has got a real problem on his hands, and he's got to get these folks to pass a decent bill."

The debate will feature amendments intended to delete or change controversial provisions in the 2,074-page bill, including creation of a government-run public health insurance option to compete against private insurers, tax increases and provisions intended to prevent federal tax dollars from paying for abortion except in cases of rape, incest or danger to the mother's life.

Nelson said he would join a Republican filibuster against closing debate on the bill if it retains the current public option provision, which allows states to opt out of a national plan. Another Democratic caucus member, independent Joe Lieberman of Connecticut, said he also will prevent a final vote if the bill contains any form of public option.

However, Sanders said Sunday on the ABC show "This Week" that he would be "very reluctant" to support a bill that lacks a strong public option. Dean also called for a public option to provide a choice for consumers.

For Democrats, each vote is crucial. Overcoming a filibuster requires support every member of the Democratic caucus, so if Lieberman or others oppose a public option, Reid will need a GOP senator to switch sides on the bill.

Sen. Carl Levin of Michigan, an influential Democrat, said Sunday the bill has "a decent chance" of getting the necessary 60 votes to end debate. Appearing on the CBS program "Face the Nation," Levin said the measure would "probably" include a public option that allows states to opt out, as now written.

Other Senate Democrats concede that some changes are necessary to get the health care bill passed. They contend their comprehensive approach is necessary to reform a system in which higher costs are draining the national economy and harming businesses and individuals.

"The political process as it's currently constituted in Washington may just be incapable of coming up with an ideal solution," Sen. Evan Bayh, D-Indiana, told the FOX program. "So we may be left with alternatives that are less than ideal. Number one would be to do nothing. I don't think we can afford to do nothing with costs going up 10, 15 percent a year. The other thing would be to vote for a bill, frankly, that we continue to have some questions about. That may be the choice that we're left with.

"So my objective is to try and make that alternative of doing something as positive as we possibly can, realizing that ... at the end of the day, it may be just imperfect."

To Republican Jon Kyl of Arizona, the Senate health care bill is too imperfect to even consider.

"There's no way to fix this bill," Kyl said on the FOX program.

Republicans call for an incremental approach that they say would reduce the costs of health care without needing to create new bureaucracies and raise taxes in a huge overhaul.

"I would suggest we put aside the health care debate until next year" to give proper attention to the Afghanistan war and economic recession, Sen. Richard Lugar, R-Indiana, said on CNN's "State of the Union."

In contrast, a separate health care bill narrowly passed by the House of Representatives earlier this month includes an income tax surcharge on individuals earning more than $500,000 a year and couples making more than $1 million. Share your thoughts on health care reform

Republicans say any tax increase is bad in a struggling economy because it hinders growth and gets passed on to consumers, while Democrats argue the bill's tax provisions don't hit the lower or middle class and will create incentive for private insurers to lower the cost of policies.

According to the Congressional Budget Office, the Senate health care bill would reduce the federal deficit by about $130 billion over the next 10 years, through 2019. Any effect on the deficit in the following decade would be "subject to substantial uncertainty," but probably would result in "small reductions in federal budget deficits," the CBO report said.

CNN's Ashley Hayes and Tom Cohen contributed to this report