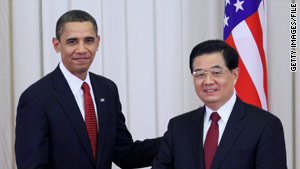 According to a news release, Obama is prepared to set a goal of reducing emissions to 17 percent below 2005 levels over the next decade.

The targets come from a climate change bill passed by the House of Representatives. The Senate has yet to pass the bill, so the United States has not committed itself to any binding goals.

"This provisional target is in line with current legislation in both chambers of Congress and demonstrates a significant contribution to a problem that the U.S. has neglected for too long," the White House said.

Obama had said he would be in Oslo, Norway, to accept his Nobel Peace Prize on December 10, but had not confirmed he would go to the United Nations summit, known as the Conference of Parties 15, which runs December 7-18.

He will attend the U.N. Framework Convention on Climate Change the day before he goes to Oslo, the White House said.

Have your say at COP15 -- join the CNN YouTube debate

Former Vice President Al Gore, an environmental activist, said Obama's announcement and attendance is "an important step. ... This action is another example of the significant change in policy on the climate crisis."

"Those who feared that the United States had abdicated its global responsibility should take hope from these actions and work towards completing a strong operational agreement next month in Copenhagen and guidelines for negotiators to complete their work next year on a comprehensive treaty," Gore said in a written statement.

Greenpeace, however, criticized Obama's decision to go at the beginning of the conference rather than the end.

"The Copenhagen climate summit is not about a photo opportunity. It's about getting a global agreement to stop climate chaos. President Obama needs to be there at the same time as all the other world leaders -- December 18," said Mike Townsley, a spokesman for the environmental advocacy group.

"This is when he is needed to get the right agreement," he added. "It seems that he's just not taking this issue seriously."

The United States is the only industrialized country that hasn't yet given the group a proposal for cutting carbon emissions, he said.

Boer added that it was "politically critical" that the U.S. indicate what it can do "in numerical terms" to reduce its climate impact.

The World Wildlife Federation said it, too, is "pleased" that Obama is attending, and it urged Washington to follow words with action.

"It's important that his words during this important moment convey that the United States intends to make climate change a legislative priority, not simply a rhetorical one," said Keya Chatterjee, the federation's U.S. climate program director.

Echoing Greenpeace's concerns, Chatterjee expressed hope that Obama will be in Copenhagen at a critical juncture.

"If his presence during the latter days of the [conference] becomes necessary to secure the right commitments, we hope the president will be willing to return to Copenhagen with the rest of the world's leaders during the final stages of the negotiations," she said.

Oxfam, a group that fights international poverty, said "Obama's personal appearance and commitment to action can bring the necessary momentum to deliver a deal."

The president has "signaled that he's ready to roll up his sleeves to make a climate change deal happen," the group said.

The White House said other administration officials will attend at least some of the conference. Included are at least four Cabinet secretaries, the head of the Environmental Protection Agency and the president's assistant for energy and climate change.

The White House announcement coincided with a UNFCCC briefing on what must be agreed to in Copenhagen.

Next month's climate talks aim to strike a deal on a successor agreement to the Kyoto Protocol, the 1997 pact that has legally binding targets for reducing greenhouse gas emissions.

The United States never ratified it, though more than 200 nations did.