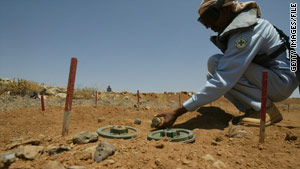 A worker attempts to clear landmines along the border between Jordan and Syria in July 2008.
STORY HIGHLIGHTS
RELATED TOPICS

"This administration undertook a policy review and we decided our landmine policy remains in effect," Kelly said in response to a question. "We made our policy review and we determined that we would not be able to meet our national defense needs nor our security commitments to our friends and allies if we sign this convention."

Opponents of the U.S. landmine policy said they were surprised.

"It is a disturbing development," said Steve Goose of Human Rights Watch. "The administration never said a policy review was under way."

Goose said the decision to leave the policy in place is at odds with the administration's professed commitments to international agreements and humanitarian issues.

"The international treaty against landmines has made a a huge difference and it is a very strong deterrent," Goose said. "It has to have been a very fast and cursory review."

The United States will attend an international conference on landmines next week in Cartagena, Colombia, sending an inter-agency delegation from the State and Defense departments as observers.

Kelly said the United States continues to work with governments as well as nongovernmental organizations (NGOs) to help remove landmines.

"The U.S. is proud to be the world's single largest supporter of humanitarian mine action," Kelly said. "Since 1993 the U.S. has provided more than $1.5 billion worldwide dedicated to building new partnerships with more than 50 post-conflict countries and supporting efforts by dozens of NGOs to promote stability and set the stage for recovery and development through mine clearance and conventional-weapons destruction programs."

The United States is the only member of NATO that will not sign the landmine treaty, Goose said. Russia and China also have not joined the 156 nations that have endorsed the ban, he said.