With dissension in the ranks, health care bill moves ahead 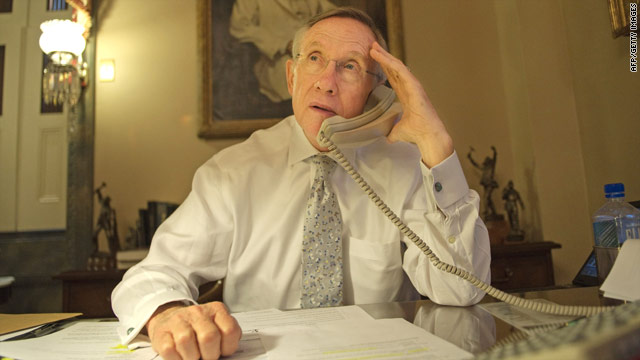 Sen. Harry Reid got the votes he needs to move ahead with the health care debate, but there are no guarantees the bill will pass.
STORY HIGHLIGHTS

(CNN) -- Senate Democrats cleared a major hurdle this weekend by voting to move ahead with debate on health care reform, but it was hardly a unified party standing behind the bill.

"We can only see the finish line; we have not yet crossed it. The road ahead will be the toughest stretch. But we have momentum and I will keep this process moving forward," Senate Majority Leader Harry Reid said after Saturday's vote.

After months of political maneuvering, Reid got the votes he needed to open debate on the floor -- but barely. Sixty senators, including 58 Democrats and two independents who caucus with the Democrats, supported moving ahead with the bill; the 39 Republicans who voted were all against it.

Some centrist Democrats are letting their party know that while they are open to debating the bill, they're not going to pass it as is. With so many Democrats on the fence and no Republicans leaning their way, there are still plenty of hurdles to come for the Democratic leadership and the bill.

The debate on amending the proposal will begin after Congress returns from its Thanksgiving break next week and is expected to last for weeks. Top Senate Democrats have already indicated that they're willing to make some changes.

"We are open because we want to pass the bill," Sen. Dick Durbin, D-Illinois, said on NBC's "Meet the Press" on Sunday.

Few expect the bill to be passed in its present form.

"Listen, in the end, this is going to be a compromise. It's not going to be a perfect bill, but it's going to be a very important starting point," Sen. Jeanne Shaheen, D-New Hampshire, said on CNN's "State of the Union" on Sunday.

The Republican National Committee is targeting the handful of centrist Democrats with a new Web video and a series of conference calls criticizing them for voting to allow debate to begin.

The 60-second video, which will be e-mailed to more than 5 million people, singles out Sens. Evan Bayh of Indiana, Byron Dorgan of North Dakota, Mary Landrieu of Louisiana, Blanche Lincoln of Arkansas, and Ben Nelson of Nebraska, as well as Reid of Nevada, according to an advance copy of the video provided to CNN.

"Rolled by pressure from Barack Obama and Harry Reid, they voted to move forward a government-run health care bill our nation does not want and can't afford," an announcer says before ticking off criticism of each lawmaker.

"This is a process where people are saying one thing, leading up to the vote, they get their arms twisted -- or in the case of Mary Landrieu you are able to triple the amount of money that was being offered to you ... and then you vote for the bill," he said on CNN's "American Morning."

To get Landrieu's vote, language was inserted in the bill that gives her state up to $300 million. Landrieu said she while she was pleased with the provision, "that is not the reason I am moving to debate."

The Senate will start trying to iron out differences in the bill when it reconvenes next week.

Key sticking points include language over funding abortions, how to pay for the bill, and the creation of a government-sponsored public option. Both the House and Senate bills include a public option, but the Senate bill gives states the right to opt out.

Nelson, Lincoln, Landrieu and Sen. Joe Lieberman, I-Connecticut, have all expressed opposition to a public option.

One compromise idea that's been tossed around is a trigger mechanism that would mandate a public option in the future if thresholds for expanded coverage and lower costs go unmet.

Asked if that would be an option if Democrats can't get the votes they need, Sen. Sherrod Brown said he couldn't answer yes or no.

"I don't think we get to that. I think what happens is there are two weeks, three weeks, whatever, of debate. Sen. Lieberman, everybody has a chance to offer amendments," Brown, D-Ohio, said on "State of the Union."

"I don't want four Democratic senators dictating to the other 56 of us and to the country, when the public option has this much support, that it's not going to be in it," he said, adding that people want every option.