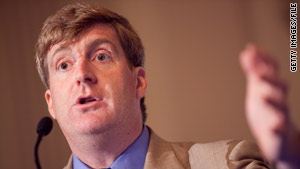 Rep. Patrick Kennedy is in trouble with the Catholic Church over his support of abortion rights.
STORY HIGHLIGHTS
RELATED TOPICS

In a statement issued Sunday, Providence Bishop Thomas Tobin said he told Kennedy in February 2007 that it would be "inappropriate" for him to continue receiving the fundamental Catholic sacrament, "and I now ask respectfully that you refrain from doing so."

Kennedy, a Democrat, is the son of the late Massachusetts Sen. Edward Kennedy and a scion of the most prominent Catholic family in modern U.S. politics.

In an interview published Sunday, Patrick Kennedy told the Providence Journal that Tobin had barred him from receiving communion and instructed priests in the diocese not to administer the sacrament "because of the positions that I've taken as a public official."

Tobin, in a statement issued in response to the Kennedy interview, said his advice to the congressman was "pastoral and confidential," and he was surprised that Kennedy chose to discuss it publicly.

"I am disappointed that the congressman would make public my request of nearly three years ago that sought to provide solely for his spiritual well-being," he said.

The Roman Catholic Church strongly opposes abortion, which has been legal across the United States since 1973. The U.S. Conference of Catholic Bishops lobbied for tight restrictions on federal funding of abortion in the health care bill the House of Representatives passed earlier this month.

Kennedy opposed a provision that restricted the use of federal money for abortions, but voted in favor of final passage of the bill that included that language.

Efforts to reach Kennedy's representatives were unsuccessful Sunday afternoon. But most bishops and priests oppose using communion as a "political weapon," and Kennedy's disclosure may be an attempt to push back against the bishops' support for the abortion restrictions in the House bill, CNN senior Vatican analyst John Allen said.

"The Catholic bishops have been fairly successful, at least to date, at putting abortion at the center of the debate over health care reform, and that obviously has generated some resentment from people who don't share their views," Allen said.

Kennedy's decision to come forward "in effect puts the Catholic bishops in a negative light, because it ends up making them look intolerant," Allen said.

Tobin said Sunday only that he asked Kennedy not to take Communion.

I see what the Bishop did as an intimidation covered up by stating, Kennedy made it public, not me.
--2DNL, from Soundoff

"I have no desire to continue the discussion of Congressman Kennedy's spiritual life in public," he said. "At the same time, I will absolutely respond publicly and strongly whenever he attacks the Catholic Church, misrepresents the teachings of the church or issues inaccurate statements about my pastoral ministry."

In an October interview, Kennedy criticized the bishops for threatening to oppose the overall bill if it did not include those restrictions. That prompted Tobin to call Kennedy's position "unacceptable to the church and scandalous to many of our members."

The latest exchange was comes on the 46th anniversary of the assassination of Kennedy's uncle, John F. Kennedy, the nation's first Catholic president. Patrick Kennedy is the last member of his family serving in Congress.