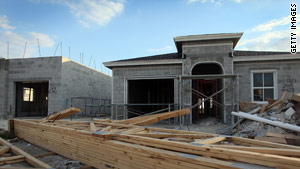 A 10.6 percent decline in housing starts in October is the latest indicator of continuing economic trouble.
STORY HIGHLIGHTS
RELATED TOPICS

Washington (CNN) -- Nearly two years into the recession, opinion about which political party is responsible for the severe economic downturn is shifting, according to a new national poll.

A CNN/Opinion Research Corp. survey released Friday morning indicates that 38 percent of the public blames Republicans for the country's current economic problems. In May, 53 percent blamed the GOP.

According to the poll, 27 percent now blame the Democrats for the recession, up 6 points from May, and 27 percent now say both parties are responsible.

"The bad news for the Democrats is that the number of Americans who hold the GOP exclusively responsible for the recession has been steadily falling by about two to three points per month," said Keating Holland, CNN polling director. "At that rate, only a handful of voters will blame the economy on the Republicans by the time next year's midterm elections roll around.."

Thirty-six percent of people questioned said that President Obama's policies have improved economic conditions, with 28 percent feeling that the president's programs have made things worse, and 35 percent saying what he's done has had no effect on the economy.

One reason for that, Holland said, may be the growing federal budget deficit: Two-thirds say that the government should balance the budget even in a time of war and recession.

"Some economic indicators may suggest that the economy has turned the corner -- but try telling that to the American people," Holland said.

The number of Americans who said the economy is in good shape -- a number that grew steadily through the spring and summer -- has now stalled, with fewer than one in five expressing a positive view of current conditions. More than eight in 10 say that economic conditions are in poor shape, with 43 percent calling them very poor.

The CNN/Opinion Research Corp. poll was conducted November 13-15, with 1,014 adult Americans questioned by telephone. The survey sampling error is plus or minus 3 percentage points.