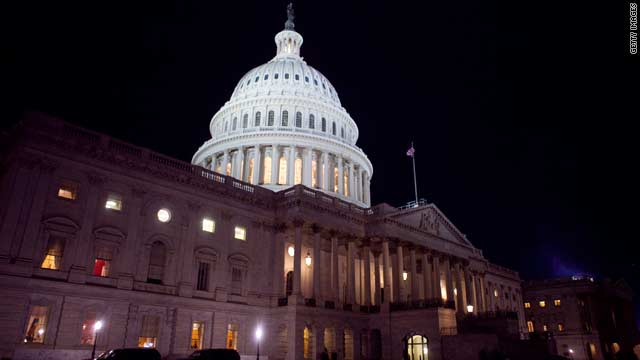 After months of debate around the country and in its committees, the full U.S. Senate will take up the health care bill.
STORY HIGHLIGHTS

At a celebratory news conference the day after unveiling the 2,074-page bill, Reid and other leading Senate Democrats touted it as long overdue reform that will provide health coverage to millions of uninsured Americans while reducing the federal deficit.

Republicans have vowed to try to block the bill, requiring Reid to round up 60 votes in the 100-member Senate to overcome a GOP filibuster and launch debate.

The Democratic caucus is composed of 58 Democratic senators and two independents. However, some conservative and moderate Democrats have expressed concern with provisions in the health care bill.

Asked Thursday if he had the votes to launch debate, Reid said: "We'll find out."

The top-ranking Senate Republican, Mitch McConnell of Kentucky, said Thursday that the "massive" Democratic bill would "rewrite one-sixth of our economy" and have "stunning unintended consequences for ourselves and for our children and for our grandchildren."

According to Reid and other Democratic leaders, the bill would extend health insurance coverage to at least 30 million additional Americans at an estimated cost of $848 billion over 10 years. They cited an analysis by the nonpartisan Congressional Budget Office for the coverage and cost figures.

The CBO estimates the proposal would reduce the federal deficit by about $130 billion over the next 10 years. Any effect on the deficit in the following decade would be "subject to substantial uncertainty," but probably would result in "small reductions in federal budget deficits," according to the CBO.

"We're not going to add a dime to the deficit, in fact, quite the opposite," Reid said after unveiling the measure. At Thursday's news conference, he and fellow Senate Democrats called the bill a chance to improve the lives of every American.

"Never again will an American citizen be denied the opportunity to have the kind of health care they deserve," said Sen. Christopher Dodd of Connecticut, while Illinois Sen. Dick Durbin, the chamber's second-ranking Democrat, chastised Republicans for opposing the bill without presenting a comprehensive plan of their own.

"I've yet to hear one Republican stand up and take on the insurance companies," Durbin said. "That might tell you something."

Durbin noted the main GOP criticism Thursday was that the bill exceeded 2,000 pages. Such a substantial measure is necessary to address an issue that involves a sixth of the U.S. economy and takes on the insurance industry, he said.

In a White House statement, President Obama hailed what he called a "critical milestone" in the push to meet his top domestic priority for 2009.

"From day one, our goal has been to enact legislation that offers stability and security to those who have insurance and affordable coverage to those who don't, and that lowers costs for families, businesses and governments across the country," Obama's statement said, adding that the Senate proposal "meets those principles."

The Senate bill seeks to reduce the long-term costs of health care for the government, businesses and individuals, while reforming how services are delivered to increase efficiency and effectiveness. It includes controversial provisions such as a government-run public health insurance option unanimously opposed by Republicans. The bill would prohibit illegal immigrants from participating in a health insurance exchange created for those unable to afford health coverage, and it would prohibit the use of federal funds for abortion coverage in the exchange, according to a briefing for journalists arranged by the Senate Democratic leadership.

According to the briefing, the bill includes a range of tax increases and new fees. The Medicare payroll tax on individuals earning $200,000 a year and couples earning $250,000 a year would increase by half a percentage point, from the current 1.45 percent to 1.95 percent. In addition, insurers providing costly health coverage -- known as "Cadillac" plans -- would face a 40 percent tax on policies worth more than $8,500 for individuals and $23,000 for families.

-- Prohibits illegal immigrants from participating in a health insurance exchange created for those unable to afford health coverage.

-- Prohibits the use of federal funds for abortion coverage in the exchange.

-- Requires individuals to buy health insurance, with a fine for noncompliance.

-- Does not mandate that all employers offer health care.

The bill would require individuals to buy health insurance, with a fine for non-compliance of $95 in the first year that would escalate to $750 by 2016. Parents would be responsible for providing coverage for children up to age 18.

Unlike the House version, the Senate bill does not mandate that all employers offer health care. Businesses with more than 50 workers, where at least one employee qualifies for government subsidies, would face a penalty of $750 for every full-time employee if it does not offer health care coverage.

Reid needs the full support of his caucus to get the 60 votes necessary to start debate on the bill. Conservative and moderate Democrats have expressed concern over the public option and overall costs. In addition, independent Sen. Joe Lieberman of Connecticut, who is part of the Democratic caucus, has said he will support launching debate on the bill, but would join a Republican filibuster if the measure still has the public option when it comes time to close debate.

Reid spent the past several weeks melding bills passed by two Senate committees. A version passed by the House -- by a 220-215 vote -- was crafted by Democratic leaders who merged legislation from three House committees.

If the Senate eventually passes a bill, a congressional conference committee would need to merge the House and Senate proposals into a consensus version requiring final approval from each chamber before moving to Obama's desk to be signed into law.

Democratic leaders in both chambers have been wrestling with the most contentious issues, including abortion and immigration, as well as how to pay for reform. The House bill has more restrictive abortion language and includes a 5.4 percent income tax surcharge on individuals making more than $500,000 and couples earning more than $1 million.

Both bills have the public option, but the Senate version allows states to opt out before the national program would go into effect in 2014.

The two bills are virtually identical on a broad range of changes, including creating health insurance exchanges, expanding Medicaid, subsidizing insurance for low- and some middle-income families and capping out-of-pocket medical expenses while preventing insurance companies from denying coverage for pre-existing conditions.