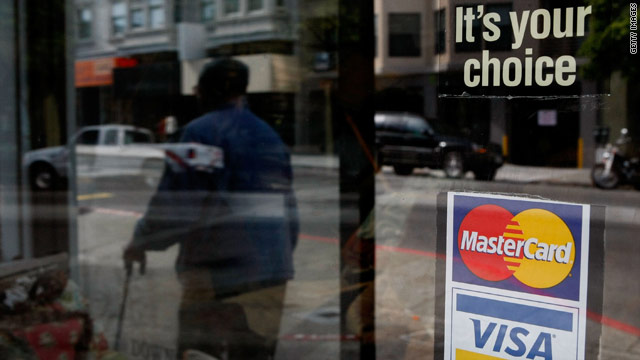 Washington (CNN) -- Have you ever read your credit card contract? If not, you're not alone. Most cardholders never read the long complicated legalese in a credit card agreement.

It's one reason so many people are stunned when they're hit with unexpected rate increases or penalty fees: It's in the small print.

CNN asked 13 credit card holders to review a basic five-page credit card agreement. Only four of them were able to find the annual percentage rate, and it wasn't easy.

"It's very confusing, and I'm an intelligent person," Amy Gould said, adding that she thinks the credit card companies have a stake in keeping their agreements opaque. "I think it tries to make the consumer confused. It takes advantage."

Alan Siegel thinks he has the answer. He runs Siegel+Gale, a marketing firm that's specialized in contract simplification for 30 years. He's simplified agreements for the Internal Revenue Service, the U.S. Mint, major banks and insurance companies. He believes that it's time credit card companies got on board.

According to Siegel, the current contracts are full of "gobbledygook." He insists that "it's a total disregard and disrespectful to the relationship with the consumer." He believes that card companies can make their agreements crystal clear.

Sielgel explains how he goes about trying to simplify contracts

Video: How do you simplify contracts?

He's developed an example. His simplified credit card contract takes up just one side of one page; his research shows that a 10th-grader could understand it.

Siegel says that because it's so clear, "it encourages people to read it and understand their rights and obligations."

Siegel says he's shown the agreement to credit card companies. Their reaction? "Panic." Why? "It's revolutionary," he theorized.

Those representing the credit card industry dispute that contention, saying they support simplification but are working within some constraints.

Siegel develops his contracts with contract and consumer lawyers and explains that corporate lawyers have resisted simplified agreements because "the premise has always been that you're putting the organization at legal risk, but you're not."

One institution is taking a step in a user-friendly direction. Beginning in December, Bank of America will be sending its credit card customers a one-page breakdown of their fees and rates. It won't replace the complicated credit card agreement, but the one-page "clarity commitment" will outline what the bank considers the most important information customers want to know.

Most of the other credit card companies wouldn't comment. They referred questions to the American Bankers Association, which blames government regulation and corporate lawyers for the convoluted agreements.

"Part of it is the nature of contract law. Some of it is required state and federal disclosures, and some of it is the result of court cases that have insisted that certain information, certain words be in the contract," said Nessa Feddis, senior vice president of the bank group.

Feddis discusses the wording of the agreements

Many in Congress disagree, and they're gearing up to limit the fine print. Democrats on the Senate Banking, Housing and Urban Affairs Committee and the House Financial Services Committee are pushing legislation that would create a new consumer protection agency. One of its missions would be to make credit card agreements easy to understand.

"Americans deserve to receive clear and accurate information, to be protected from hidden fees and abusive terms, and to know that the financial products that they're being offered are safe," said Senate panel Chairman Chris Dodd, D-Connecticut.

Those drafting the legislation say this agency would simplify contracts, requiring plain English writing and stripping away incomprehensible disclosures. But the most controversial piece? The agency could push companies to offer simpler credit cards with fewer tricks and traps.

Republicans in the House and Senate oppose the Democrats' vision of the consumer agency, but they support alternate approaches that beef up consumer protections and empower federal regulators to stop abusive practices.

But the industry is fighting the reforms. The American Bankers Association and the U.S. Chamber of Commerce argue that they'll stifle innovation and limit consumer choice.

The bankers group's Feddis insists, "It's important to protect people, the vulnerable groups. But the problem is to do it in a way that the vast majority of people who manage their financial products very well continue to have choice."

The Federal Reserve has the power to simplify credit card contracts and has approved some changes regarding disclosures. They go into effect next year.

Read what the Fed has done

"What the Fed did will help," said Chi Chu Wu of the National Consumer Law Center, but it "will not be enough."

Congress is still debating the consumer reforms. Don't expect a vote on them until next year.

In the meantime, Siegel says, he wishes credit card companies would take steps to simplify contracts on their own.

"These are smart companies. We should encourage these companies to do things more intelligently and clean up their contracts." He believes that it would be good for their business. "It would go a long way to re-ignite the trust people have in financial institutions."

As for the simplified contract Siegel drew up? It was a big hit with our 13 cardholders.

"This is absolutely very clear. It's very quick and easy," Ellen Hunt said.

Ron Wilkerson agreed. He added with a laugh, "This is basically all you need to see. And it's one page, so when I shred it, it won't break the machine."