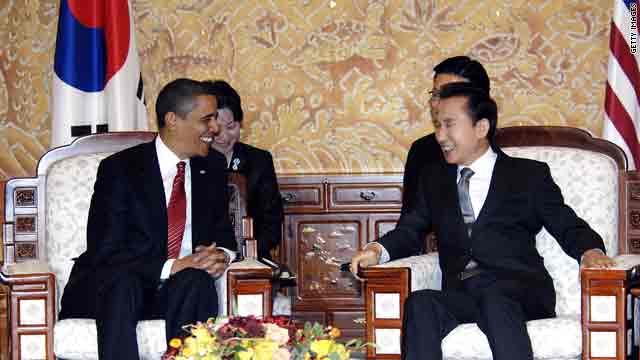 "If North Korea is prepared to take concrete and irreversible steps to fulfill its obligations and eliminate its nuclear weapons program, the United States will support economic assistance and help promote its full integration into the community of nations," Obama said. "That opportunity and respect will not come with threats. North Korea must live up to its obligations."

Bosworth's trip is slated for December 8.

"Convincing North Korea to give up their nuclear program, it is not a simple matter," according to Lee, who said there's no deadline, at the joint news conference with Obama. "It's not going to be easy, but I believe it is possible that we can resolve this issue peacefully."

The development comes at the end of the U.S. president's tour of Asia, which included stops in Japan, Singapore and China before his visit to South Korea.

A Bosworth mission had already been announced, but a date was not previously mentioned publicly. The United States has been careful to describe the trip as only a limited diplomatic foray and one not designed to replace the fuller negotiations.

"From our standpoint, the purpose will be to facilitate the early resumption of the six-party talks," P.J. Crowley said at a U.S. State Department briefing last week.

The so-called six-party talks on North Korea's nuclear program had come to a standstill. But the Bosworth trip could lead to new negotiations between North Korea and the United States, South Korea, Japan and Russia and China.

"We are very realistic about our expectations," he said. "We come to this meeting prepared to engage North Korea in the context of the six-party talks, but obviously the bottom line here is that North Korea has to take affirmative steps toward denuclearization. That remains our core objective."