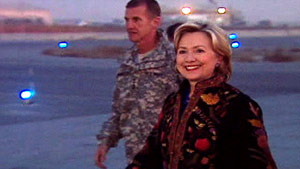 Kabul, Afghanistan (CNN) -- Secretary of State Hillary Clinton said Wednesday -- the eve of Afghan President Hamid Karzai's inauguration for a second term -- that now is a "critical moment" for Afghanistan, because Karzai has a "clear window" to demonstrate what kind of government he will lead.

Speaking to staff members at the U.S. Embassy, Clinton said there is a careful and thoughtful review of U.S. policy going on "because we know this is a turning point."

"We want to be a strong partner to people of Afghanistan," she said, "and to the government."

Clinton met with embassy staff before meeting with U.S. Ambassador Karl Eikenberry and Gen. Stanley McChrystal, the commander of U.S. forces in Afghanistan. Afterward, she had dinner with Karzai.

The two, flanked by their senior aides, met at a second-floor reception room at Karzai's palace. They spoke about Clinton's travel schedule and about the planning for Karzai's Thursday inauguration.

They also spoke about the difficulty in accommodating all the Afghans who want to attend the ceremony. The government expects about 800 people to attend in all; some will have to stand.

Clinton's attendance at the inauguration will show U.S. support for Karzai's government after an election that was tainted by fraudulent balloting.

Karzai is under intense international pressure to clean up corruption within his government, and Clinton was to deliver a tough message on the need to show results, a senior U.S. official tells CNN.

The senior U.S. official, who is not authorized to speak publicly about details of Clinton's meeting with Karzai, said the Obama administration already is discussing with the Karzai government specific "benchmarks" that will require Afghan ministries to be certified as "open and transparent" if they are to receive direct payments from the U.S. government.

If ministries are not certified as open and transparent, they can continue to receive technical assistance, but not direct U.S. funding, the official says. If the assessments determine that the ministry needs additional specific technical assistance to be certified, the U.S. will provide it.

Clinton's first visit to Afghanistan as secretary of state comes as President Obama is deciding whether to send up to 40,000 more troops to Afghanistan, as requested by McChrystal.

A major factor in Obama's decision on how many troops to send to Afghanistan centers on the Afghan government's ability to partner with the United States to fight the Taliban.

In the past several weeks, Eikenberry has sent two cables to Washington expressing reservations about troop increases amid lingering concerns about Karzai and the uncertainty about the government he will put in place.

On Sunday, Clinton said she had "made it clear" that the United States won't provide civilian aid to Afghanistan's government agencies without an effective certification process that shows the money will be spent on its intended purposes.

"We believe that President Karzai and his government can do better," Clinton said on the ABC broadcast "This Week," adding that Obama's administration was "looking for tangible evidence" that the Karzai administration would be more responsive to the needs of the Afghan people.

She cited the need for the Karzai government to crack down on fraud and "demonstrate there's not impunity for those who are corrupt."

The senior U.S. official says the United States has certified departments in the Ministries of Public Health, Communications and Finance to receive direct U.S. government assistance.

During the next three months, he says, it will assess the Ministries of Education; Agriculture, Irrigation, and Livestock; and Rural Rehabilitation and Development. Two assessments will be carried out -- financial and procurement -- at each ministry. If those assessments determine that the procurement, financial, and expenditure systems are adequate, the U.S. will certify them as having the capacity to accept direct assistance.

The Afghan government already has announced it is creating a commission that will investigate allegations of corruption. It also says it will create a tribunal in the Justice Ministry that will prosecute corruption cases that the commission has investigated.

This U.S. official says the United States is not trying to "hector, lecture or look over the shoulder" of the Afghan government, but it does want to make sure U.S. tax dollars are spent wisely. The U.S., he says, "wants an Afghan-led process to fight corruption."

Clinton told the NBC program "Meet the Press" on Sunday that the primary U.S. mission in Afghanistan is defeating al Qaeda, rather than making a long-term commitment to rebuild the country.