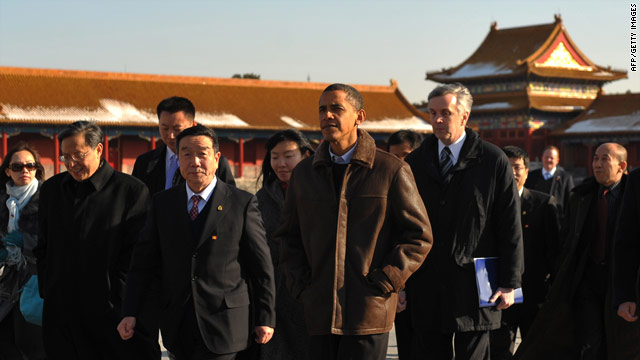 Beijing, China (CNN) -- China and the United States, the largest producers of greenhouse gases, will team up to fight climate change and create clean energy, their leaders said Tuesday.

Chinese President Hu Jintao and President Obama said their nations will cooperate to advance technologies and work toward a global agreement on reducing carbon emissions.

"As the two largest consumers and producers of energy, there can be no solution to this challenge without the efforts of both China and the United States," Obama said. "That is why we've agreed to a series of important new initiatives in this area." What would you ask Obama? Share your question for CNN's interview

The declaration by Hu and Obama comes ahead of next month's U.N. Climate Change Conference in Copenhagen, Denmark, and follows recent acknowledgment by the world's top economic powers, including the U.S., that there's no hope of a major breakthrough on climate change by year's end.

The U.S. president said the two leaders want to accelerate the world toward a pact to cut greenhouse gases. The leaders did not offer a time frame, however.

"Our aim ... is not a partial accord or a political declaration," Obama said, "but rather an accord that covers all of the issues in the negotiations and one that has immediate operational affect.

"This kind of comprehensive agreement would be an important step forward in the effort to rally the world around a solution to our climate challenge."

Instead of reaching a final deal in Copenhagen, a strategy dubbed "one agreement, two steps" was unveiled at the Asia-Pacific Economic Cooperation forum summit over the weekend in Singapore. The aim is to produce a pact over a longer period.

The first step would be to have all 191 countries involved in the Copenhagen summit signing on to a framework that includes key ingredients, such as how to finance the coordinated effort to battle climate change. The second step, a binding deal on cutting carbon emissions, would be hashed out in further negotiations.

"Opportunity is knocking. It is up to you to open the door," U.N. Secretary-General Ban Ki-moon said in a statement Monday. "We must seize this opportunity to create a safer and more prosperous future for all, to reduce the emissions that are causing climate change and to help the most vulnerable adapt to impacts that are already under way."

Like the United States and China, APEC and Group of 20 leaders -- the world's leading economies -- have pledged to drive toward a climate-change agreement in Copenhagen.

The conference, set to begin December 7, aims to strike a deal on a successor agreement to the Kyoto Protocol, the 1997 pact that has legally binding targets for reducing greenhouse gas emissions. The United States never ratified it, though more than 200 other nations did.