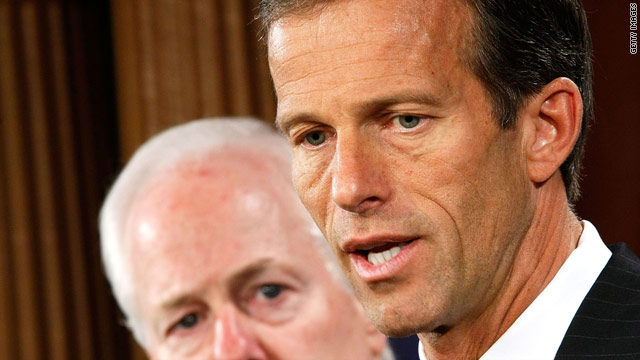 Washington (CNN) -- He walks through Washington's Reagan National Airport, arriving as he does nearly every Monday from a weekend home in South Dakota. He makes his way unnoticed.

But John Thune's anonymity may not last forever.

He is a Republican on the rise: a freshman senator who is already a member of the GOP leadership.

As head of the Senate Republican Policy Committee, Thune runs the weekly strategy session where all Senate Republicans try to find consensus on the best way to challenge President Obama and the Democratic majority.

"It's probably the most candid assessment that we have in a given week," Thune said, riding the subway to the Tuesday lunch.

With just 40 Republicans in the Senate now, Thune insists that there is still a diversity of GOP views -- but one that he argues must be expanded.

In a leadership made up mostly of veteran senators from the South, 47-year-old Thune brings youth and what he calls the prairie sensibilities he learned growing up in small town South Dakota.

Video: Thune on the rise

"There are just basic sort of common sense principles that I think make sense and that people understand. One is that you can't spend money you don't have; two is, when you borrow money, you have to pay it back," Thune said.

GOP sources say Thune plays the role of the "regular guy" in the leadership and warns against "Washington-speak."

"That gets lost on the American people," Thune said. "They want you to speak in language that isn't tied up in the archaic procedures of Washington."

Thune argues that Republicans can rebuild only by uniting around a promise to control spending -- and meaning it.

His big push these days is to return unused bailout money.

"The TARP program now has over $300 billion of unspent funds. Why not end that program and apply it to the federal debt?"

Thune may be popular with Republicans, but for Democrats, his presence in the Senate still stings.

In 2004, he defeated Democratic leader Tom Daschle in a brutal campaign. With the help of the Bush White House, Thune blasted Daschle as a Washington insider who lost touch with his South Dakota roots.

Thune was sworn in alongside another new young senator named Barack Obama.

"We got along well," Thune remembered, "but he wasn't here for all that long, you know."

The two men have something else in common: a love of basketball.

At 6-foot-4, Thune is considered one of the best basketball players in the Senate.

Still, he never played against Obama and hasn't been invited to the White House.

"Go figure," Thune said with a wry smile. "I'm still waiting for my invitation to play."

There's buzz in some corners about Thune running for president himself in 2012.

He had notoriety inside the GOP for unseating a Democratic leader, and party officials say he is a hot commodity on the Republican fundraising circuit.

But ask Thune about a White House run, and he won't go there.

"I may go across Iowa, but it will be to get somewhere."

For now, the place to catch Thune running is his morning jog on the Washington Mall.