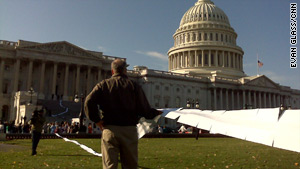 Protesters unfurl a copy of the House health care reform bill during a rally Saturday outside the U.S. Capitol.

Washington (CNN) -- Foes of the House Democrats' health care bill rallied outside the Capitol Saturday afternoon, hours before what many of them anticipated will be a setback for their position -- approval of House Speaker Nancy Pelosi's bill.

"It may pass out of the House tonight. We do realize that," Jenny Beth Martin, event organizer for the Tea Party Patriots, said. "But there is the Senate still. And we are going to leave no stone unturned and fight the government taking over our health care."

Chanting "Kill the bill" and "Hell, no" throughout the nearly 90-minute rally, the few hundred attendees kept up their opposition despite having a much lower turnout than a similar rally held on Thursday.

More than a dozen Republican lawmakers spoke to the protesters and encouraged them to keep up the fight by speaking to wavering Democrats and their families, friends and neighbors about the legislation.

"We are here for one purpose: Kill the bill!" said Rep. Marsha Blackburn, R-Tennessee.

"I diagnose [this bill] as a dead, rotting stinking fish that we will not eat," said Rep. Paul Broun, a Republican doctor from Georgia.

And in a fiery speech trying to convince the conservative "blue dog" Democrats to vote against the bill, Rep. Joe Wilson, R-South Carolina, asked, "Are they a blue dog or a lap dog? We'll find out."

"Millions of Americans are watching right now," the president told reporters in a brief news conference in the White House Rose Garden. "Their families and businesses are counting on us. After all, this is why they sent us here: to finally confront the challenges that Washington had been putting off for decades. To make their lives better. To leave this country stronger than we found it."

Obama's comments came shortly after he had returned to the White House from Capitol Hill, where he met with the House Democratic leadership.