Analysis: Do the elections spell trouble for Obama? 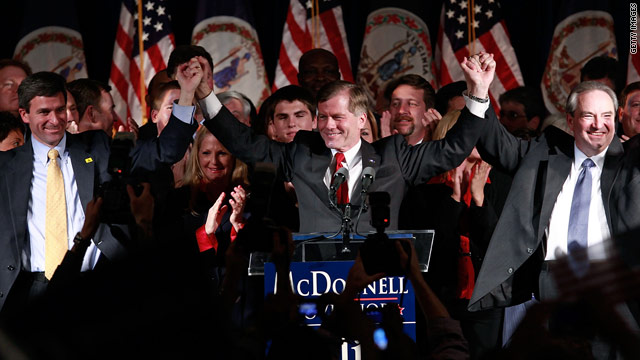 Washington (CNN) -- Victories in New Jersey and Virginia Tuesday provided a major shot in the arm for the Republican Party heading into the 2010 elections, but the Democratic losses of these two governorships should not be interpreted as a significant blow to President Obama.

While the economy and jobs were the chief concern for voters in both states, 26 percent of New Jersey residents said property taxes was also a major issue, while another 20 percent mentioned corruption, according to CNN exit polling. In a similar CNN survey taken in Virginia, health care was the most important issue for 24 percent of the voters, while 15 percent named taxes and transportation was mentioned by 7 percent.

Further proof that this election was not solely focused on Obama, 56 percent of Virginians said that the president was not a factor when it came down to their vote. In New Jersey, that number increased to 60 percent of the people who went to the polls on Tuesday.

Perhaps this was the problem for Virginia Sen. Creigh Deeds and New Jersey Gov. Jon Corzine.

Neither Democratic candidate was Obama; neither was a great spokesman for "change;" and Democratic strategists and grassroots activists said each candidate failed to give independents a reason to support them.

Still, in the coming days a storyline will develop that this was a referendum on Obama and his policies.

At the same time, another narrative will continue to evolve over the future of the Republican Party as grassroots conservative activists seek to increase their influence following the success of forcing the centrist Republican nominee in a New York congressional special election from the race.

Conservative Party candidate Doug Hoffman's loss to Democratic nominee Bill Owens was just a side note in a greater story about the beginning of a civil war between conservative activists and party leaders as the GOP seeks to rebuild after suffering devastating losses in 2008.

Two story lines, whether right or wrong, that will help shape the thinking, the strategy and the politics of Democrats and Republicans heading into the midterm elections.

The inclination by some Democrats seeking reelection next year might be to run away from Obama and chart an independent path believing that he was at least partially to blame for the defeats of Corzine and Deeds. But Democratic strategists and activists caution that this is the wrong decision to make. In order to win in 2010, these Democrats said candidates need to embrace the president and embrace his policy goals.

"You want to run as somebody who is supporting the Obama agenda, with an exception here or there, instead of being disdainful," said Steve Murphy, a consultant who works with conservative Democratic incumbents and challengers.

Jane Hamsher, founder of the liberal political blog firedoglake, noted that it is freshmen and sophomore Democrats who won by narrow margins in 2006 and 2008, who "are scared" of losing their seats in 2010.

The problem does not just lie with House and Senate Democrats. It is an issue for the White House.

"The political challenges for this White House will be to transfer this kind of political power to other candidates," said a veteran Democratic strategist, who spoke on the condition of anonymity so as not to draw fire from the Obama administration. iReporter: "Very good night" for Democrats

On Tuesday, the Obama magic did not rub off on Corzine or Deeds.

The numbers were worse for Deeds in Virginia. Ten percent of the electorate was age 18 to 29 and Republican Bob McDonnell captured 54 percent of this voting bloc. Deeds overwhelmingly carried the African-American vote that made up16 percent of people who turned out on Tuesday, while 66 percent of voters who identified themselves as independents backed McDonnell.

The White House has already played an active role in the 2010 mid-term elections and now the question is whether the Obama political operation will try to devise a formula to catch lightning in a bottle once again to help Democratic allies on Capitol Hill. Share your thoughts on the 2009 results

For the past year, the Republican Party has been without a national leader as it works to rebuild after losing the White House and additional House and Senate seats in 2008. At times, the likes of talk radio host Rush Limbaugh has helped drive the conversation, but it is the grassroots activists who have emerged as important players in the reconstruction of the GOP.

Hoffman's loss certainly doesn't help these conservatives, but it is not a fatal blow, either. The battle for these activists was with the GOP leadership, and they won by successfully pushing GOP nominee Dede Scozzafava out of the race.

It is just the beginning, said conservative leader Richard Viguerie. "We want to take the party back to a small government party," he said. "The train has left the station. The battle has been engaged."

And by engaged, Viguerie means by the non-traditional conservatives who have rallied around the Tea Party idea.

"There are new people," he said. "They are saying it is time to lock and load and go to war with these establishment Republicans."

But is an internal battle in the GOP good for the party?

Conservative columnist Matt Lewis said he thinks that these internal struggles help to strengthen the party in the long run.

"This is a battle for the heart and soul of the Republican Party," Lewis said. "Political parties ought to have vigorous primary campaigns, fight it out in the primaries over ideological battles."