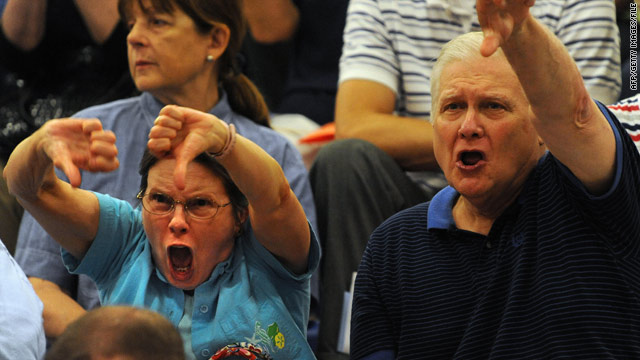 Washington (CNN) -- As voters across the country head to the polls Tuesday, one thing appears certain: Many of them are angry.

And that anger could shape the results of three of the most high-profile elections this year -- gubernatorial battles in New Jersey and Virginia and the fight for an open seat in New York's 23rd Congressional District.

"We're in the middle, I think, of a political rebellion going on in America," House Minority Leader John Boehner said Sunday on CNN's "State of the Union." "And this rebellion is by people who really have not been actively involved in the political process and they don't really care if you're a Democrat or a Republican. They want to see people who are going to stand up and protect the future for our kids and grandkids."

The victory by the grassroots on the right over the moderates and the Republican Party structure in New York 23 could foreshadow more fights ahead for the GOP, as the party tries to rebuild following election defeats in 2006 and 2008. But the energy currently on the right is powerful, and that could come in very handy in next year's crucial elections.

Anger could also be a factor in New Jersey and Virginia, the only two states that hold gubernatorial contests in the year after a presidential election. For the past 32 years, the party that won the White House lost Virginia the next year. It's been the same story in New Jersey for the past two decades. History may repeat itself in 2009.

"Right now it looks like Republicans and conservatives are angry and energized to vote in the midterms next year," said Stuart Rothenberg, editor and publisher of the nonpartisan Rothenberg Political Report.

Anger is a major factor in the New York 23 race, which has grabbed national attention. The House seat in the district in northern New York state opened up after nine-term Republican Rep. John McHugh stepped down after being confirmed as Secretary of the Army.

Republicans have represented this area of the state since 1872. But in last year's presidential election, President Obama edged out John McCain in the district.

Local Republican leaders picked state assemblywoman Dede Scozzafava as their nominee because they felt her moderate views would appeal to centrist Republicans, independents and even some Democrats. But the move sparked a revolt among many conservatives, who were angry with what they called Scozzafava's liberal views on same-sex marriage, abortion, and on fiscal matters such as the federal stimulus. They backed Doug Hoffman, an accountant, who is running on the Conservative Party line.

Scozzafava suspended her campaign on Saturday after she nose-dived in local public opinion polls following a flood of support and contributions by some top conservative names and organizations for Hoffman.

Scozzafava then endorsed Bill Owens, the Democrat in the race, and campaigned for him on Monday. Conservatives protest Biden appearance for Owens

In Virginia, the most recent polls suggest that the Republican candidate, Bob McDonnell, the state's former attorney general, holds a double-digit lead over Democratic candidate Creigh Deeds, a lawmaker from the rural western part of the state. While the battle for Virginia will be won or lost because of state issues and the candidates themselves, the contest can also be partially seen as an early test on Obama and his policies.

"The race in Virginia is partially about the broad national environment, how the two political parties are doing, and how the president is doing," Rothenberg said.

McDonnell's campaign appears to be trying to nationalize the contest by linking Deeds to the Democrats who control the White House and Congress. A McDonnell television ad says: "Creigh Deeds supports Washington's job-killing policies."

At a debate in September, Deeds was asked by the moderator if he was a "Barack Obama Democrat."

"I would try to escape that by saying I'm a Creigh Deeds Democrat," responded Deeds, who also acknowledges that "a lot of what's going on in Washington has made it very tough."

If Republicans win back the governor's office, they "could now show they are alive and well and they are competitive in Virginia, but it also sends a national message about the Republicans' ability to come back in the Obama era," said Mark Rozell, a professor of public policy at George Mason University in Virginia. Voters out early in Virginia

Democrats also control the other governor's seat up this year, in New Jersey, where Gov. Jon Corzine is fighting for a second term and for his political life.

Corzine trailed his Republican challenger, former federal prosecutor Chris Christie, in the polls during the summer but has pulled even in just about all recent surveys.

The polls suggest Corzine has increased his backing among fellow Democrats, but growing support for independent candidate Chris Daggett may also be a major contributing factor.