Robert Gibbs is adviser, friend and mouthpiece for Obama 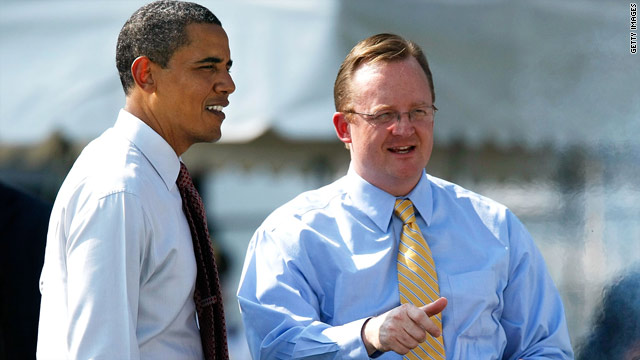 Washington (CNN) -- In the tight circle that surrounds President Obama, White House spokesman Robert Gibbs is in the inner bubble.

He's the 3 a.m. wake-up call when North Korea fires a test missile, or when the Nobel committee picks the president for the top award.

"Trust me, it is a job I would gladly give to anybody who would volunteer," Gibbs said.

After all, he's an adviser, a friend and a mouthpiece for the administration with more access than recent press secretaries.

"I can walk in and ask him a question at any given time, pick up the phone and talk to him about anything at any given time. I think [that] makes my job easier," Gibbs said in an exclusive interview with CNN.

The president and the press secretary first connected in 2004 when Obama was a virtual unknown outside of Chicago, Illinois, and was campaigning for the U.S. Senate. They clicked and grew close, leading Obama to tell the Wall Street Journal in a 2008 interview, "Robert is the guy I want in the foxhole with me during incoming fire. If I'm wrong, he challenges me. He's not intimidated by me."

Gibbs chuckled while recalling the comment and quipped, "That is when we called him 'Senator' or by his first name."

While challenging Obama when he was on a campaign bus is much different than pushing back in the Oval Office, Gibbs insists that Obama still seeks opposing opinions and dislikes an atmosphere where everyone tells him he's right.

Ten months into his job in the White House, Gibbs, who grew up in Auburn, Alabama, says he's finally starting to get more comfortable, even though he admits that the 24/7 pace "is certainly a challenge. It can wear you down."

Especially when it comes to the daily main event. Gibbs briefs the White House press corps, usually for about 45 minutes. He rarely shows up on time, but he's always ready to spar.

The mouthpiece for the president often uses humor or sarcasm to deflect a tough question.

In one exchange about the tit for tat over cable chatter and radio talk show host Rush Limbaugh, Gibbs uttered, "I'll plead guilty to counterproductivity." In another about managing the message, Gibbs said, "Is there any evidence currently going on that I'm controlling the press? Poorly, I might add!"

Is this an effective strategy to handle the media?

"You tell me," Gibbs said. "Look, there's no doubt that using a little humor to get out of a series of bad questions isn't an altogether bad technique."

Watch Gibbs talk about his job

Especially since he's involved in a daily high-wire act, as he calls it. The cameras are always rolling. A bad day for the White House spokesman usually means a bad day for the administration.

"My father likes reminding me he always thought my mouth would get me into sizable trouble, which it can on any given day," Gibbs said. Before starting his job, Gibbs studied former press secretaries and sought out their advice. He still relies on their guidance "fairly frequently," he said.

For example, Gibbs revealed that just last week he reached out to former Clinton spokesman Mike McCurry to get "feedback on a question that was sort of nagging me a little bit." When probed on what that question was, Gibbs replied, "I'm not going to get into that, but good try."

Even with the major policy issues the White House is juggling, from Afghanistan to health care to the economy, Gibbs says he's still having fun.

"If you didn't enjoy the job that I have, it would be the worst job in all of Washington," he said. What he doesn't like, he said, is the fact that he's now a celebrity.

"People that I don't know recognize you walking down the street. It's awkward," he said.