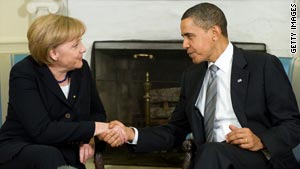 Washington (CNN) -- Six days before the 20th anniversary of the fall of the Berlin Wall, German Chancellor Angela Merkel addressed a joint meeting of Congress on Tuesday and challenged U.S. lawmakers to tear down other walls.

"Today's generation needs to prove that it can meet the challenges of the 21st century. In a sense, we are able to tear down walls of today," she said.

What that means, Merkel said, is "creating freedom and security, creating prosperity and justice. And it means protecting our planet."

Merkel, the first German chancellor to address a joint meeting of Congress, emphasized the need for an agreement on global warming.

"Icebergs are melting in the Arctic. In Africa, people become refugees because their environment has been destroyed," she said.

"We need an agreement on one objective: Global warming must not exceed 2 degrees Celsius."

She said she hopes that agreement will be reached at a the climate conference in Copenhagen, Denmark, next month.

Merkel also touched on the global financial crisis, saying that the "near collapse of the markets has shown what happens when there is no underpinning order."

"A globalized economy needs a global order ... a global framework of rules," she said. "Without global rules and transparency and supervision, we will not gain more freedom, but rather risk the abuse of freedom and thus risk instability."

Merkel also recalled her years in East Germany before the wall fell. The United States, "the land of unlimited opportunity was for me, for a long time, impossible to reach," she said.

"The wall, barbed wire and the order to shoot at those who tried to leave limited my access to the free world," she said.

Merkel said she and her countrymen owed the United States for its friendship and support.

"To put it in just one sentence, I know, we Germans know, how much we owe to you, our American friends, and I personally shall never ever forget this," she said.

Earlier, President Obama welcomed Merkel and thanked her for her country's "sacrifice" in Afghanistan. He also called her a leader on the issue of climate change.

He said her opportunity to speak to the joint meeting of Congress was a "great honor."

"It is, I think, a very appropriate honor that's been bestowed on Chancellor Merkel," he said.