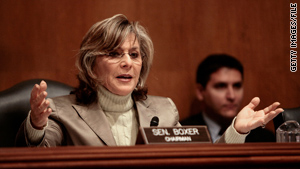 Sen. Barbara Boxer says the reason given for the walkout "doesn't hold up to the light of day in fairness and objectivity."
STORY HIGHLIGHTS
RELATED TOPICS

Only one of the seven Republicans on the Senate Environment and Public Works Committee -- Sen. George Voinovich of Ohio -- showed up for the panel's opening session. He left the meeting after delivering an opening statement.

Committee rules require at least two minority party members to be present to reach a working quorum. However, an exception could allow the committee to proceed without any Republicans, according to committee staff members.

Matt Dempsey, a spokesman for the committee's Republicans, told CNN that applying the exception would be a "nuclear option" by Democrats that would worsen the panel's already strained political climate.

In his remarks, Voinovich asked the committee to hold off its debate until getting a full Environmental Protection Agency analysis of a bill that he said would affect every American.

The committee chairwoman, Sen. Barbara Boxer, D-California, responded that the panel has held dozens of hearings on the issue, and that she had taken the unprecedented step of scheduling a session with EPA experts later Tuesday to answer any questions by committee members.

When the hearing proceeded, Voinovich left the room, leaving only Democratic members at the table.

Boxer said the panel would continue to meet, including the session with EPA experts later Tuesday.

"We're going to just be here every day until they join us," she said. She also criticized the Republican boycott, saying, "The reason they give to not work on it just doesn't hold up to the light of day in fairness and objectivity."

The committee's 12-member Democratic majority ensures enough support to send the bill to the full Senate without any Republican support.

The House has already passed a similar bill, but Senate approval is considered a much tougher challenge for Democratic proponents of the "cap-and-trade" legislation that would contribute to reshaping the U.S. energy system.