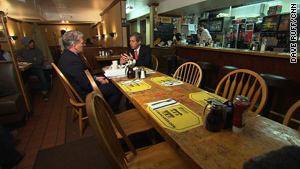 Chris Daggett tells CNN's John King that voters shouldn't think that a vote for an independent is a wasted vote.

Princeton, New Jersey (CNN) -- Chris Daggett is a political novice yet has the routine down pat: Approach a morning commuter, extend his hand and a good-morning greeting, and pick a question from his repertoire:

"Are you happy with Jon Corzine?"

The shaking head is a preview of the answer: "I'm not happy with anybody."

The man tells Daggett he has a doctorate in education; Daggett talks about his promise to invest more in higher education if elected governor.

"Thanks -- hope you'll consider voting for me," Daggett says.

All standard fare, until Daggett hands the man some campaign literature. Stapled to the back: a guide to the different places Daggett's name can be found on the ballot in each of New Jersey's 21 counties.

Across the state, the Democratic and Republican candidates get the top two spots on the ballot. But slots are assigned to independent and third-party candidates by a lottery system. As a result, in some counties Daggett, despite being the only independent to reach the threshold for being invited to televised debates, is listed six or seven spots below the two major-party candidates.

Just one of many hurdles that independent candidates face.

He is well behind in fundraising and in name recognition. And as an independent, Daggett doesn't have a party apparatus to help with phone banking and turnout efforts come Election Day, November 3.

And yet one recent poll had him at 20 percent, and despite the longer-than-long odds, Daggett insists he believes he has a chance in his race against incumbent Democrat Corzine and GOP challenger Chris Christie.

"I did it in part because I could sense that there is a feeling out there that things were going off track and we needed an alternative," Daggett said in an interview in Princeton between campaign stops this week. "It's far deeper and far wider than I ever imagined."

At his events, there is little doubt about voter unhappiness with the status quo and with their major-party choices in Tuesday's election.

At the Princeton Junction train station, one voter criticizes the "right-wing Republican candidate." Another man says "the Democrats and Republicans have screwed up totally, so maybe an independent this time."

Yet even among those intrigued by Daggett, there is skepticism.

At Temple B'nai Abraham in Livingston, Daggett's opening remarks include a staple that almost always draws cheers and nods: "I don't think it matters who's in Trenton, Republican or Democrat, nothing ever changes."

But as he takes questions, one man notes the legislature will be full of Democrats and Republicans, and several ask questions about whether Daggett could advance his agenda.

He notes his years working in state and federal government, mostly in environmental positions, in both Democratic and Republican administrations.

And he suggests the current president of the United States might be having a smoother time governing in Washington if he did not have to worry so much about the Democrats who control Congress.

He tells every audience they need to vote their hearts and cast aside any thought that a vote for an independent is a wasted vote. If they do, he predicts he can rise to 34 percent or 35 percent and win a three-way race.

John Weingart shakes his head at the notion.

"I think he has had a big impact in this race," said Weingart, the associate director of the Eagleton Institute of Politics at Rutgers University. "But I don't think he can win."

It is an Eagleton Institute poll that put Daggett at 20 percent -- a good bit higher than most other surveys. And yet Weingart believes that as is tradition, a good deal of that vote will peel off come Election Day because voters will believe it is a wasted vote.

"Both that and because he doesn't have much money to get his message out, it's hard to find his name on the ballot -- those reasons," Weingart says.

Most polls show Corzine as the beneficiary, as a good chunk of Daggett's support comes from moderate Republicans and independents who don't like the Democratic incumbent but won't support the conservative GOP nominee.

In the interview, Daggett laments the GOP's rightward shift and describes his desire for a more centrist approach: "It got captured by people on the further extreme of conservatism. It got harmed, as the country got harmed, I think, by the intense focus for a period of time on social issues," he says of the GOP.

"I'm more of a libertarian in that regard, I just want people out of my lives in the government. I don't want them to tell me, I mean, I'm very supportive of women's right to choose, so I'm pro-choice. I've said that I support stem cell research. I support gay marriage, and if a bill were to pass, I would sign it in the Legislature. I believe strongly in gun control, but at the same time I believe in the Second Amendment right to have a weapon, and I believe in hunters' rights to hunt and I think, a majority of Americans feel that way. But we get captured by extremes on both sides."

He says he won't regret running for a second if he loses and is the difference in Corzine winning re-election.

"No, not in the least, because I never saw in the U.S. Constitution anything that said about, that it had to be a two-party system or that somebody who tried to challenge the two parties was a spoiler," Daggett said. "I mean, that's just antithetical to everything I believe in, in democracy. Democracy is about the exchange of ideas and the figuring out who has gotten the best ideas and the voting for the best person. I keep saying in the debates that it's never wrong to vote for the right person."