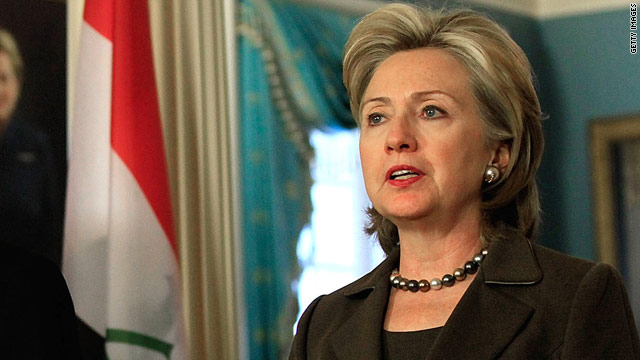 Islamabad, Pakistan (CNN) -- U.S. Secretary of State Hillary Clinton said Friday she did not come to Pakistan for "happy talk."

Her three-day trip is aimed at getting frank, open discussions going about the fight against terrorism, and that includes presenting U.S. concerns about how much success Pakistan is having, she said.

In an interview with CNN, Clinton said it's time to "clear the air" with a key U.S. ally. She added, "I don't think the way you deal with negative feelings is to pretend they're not there."

"I think it's important, if we are going to have the kind of cooperative partnership, that I think is in the best interest of both of our countries, for me to express some of the questions that are on the minds of the American people," Clinton told CNN's Jill Dougherty.

The secretary's comments came a day after she seemed to question the commitment of some in the Pakistani government for going after the leaders of al Qaeda, who U.S. intelligence experts believe are taking refuge in Pakistan's remote tribal areas.

"Al Qaeda has had safe haven in Pakistan since 2002," she told a group of Pakistani journalists Thursday. "I find it hard to believe that nobody in your government knows where they are and couldn't get them if they really wanted to." She added, "Maybe they're not gettable. I don't know."

In the CNN interview Friday, Clinton said she was not suggesting that someone inside the government might be complicit with al Qaeda or might be failing to follow through in fighting the terrorist group.

"No, no," she said. "What I was responding to is what I have been really doing on this trip, which is there exists a trust deficit, certainly on the part of Pakistanis toward the United States, toward our intentions and our actions. And yet we have so much in common, we face a common threat. We certainly have a common enemy in extremism and terrorism, and so part of what I have been doing is answering every single charge, every question."

Trust "is a two-way street," she added. While Pakistan's military operation has been "extremely courageous in both Swat and now in South Waziristan, success there is not sufficient," she said. "... I just want to keep putting on the table that we have some concerns as well. And I think ... that's the kind of relationship I'm looking to build here."

I've ... reminded people that we've been partners and allies from the beginning of Pakistan's inception.
--Secretary of State Hillary Clinton
RELATED TOPICS

Asked whether she had underestimated the level of anti-American sentiment in Pakistan, Clinton said, "No, because I've been following the research and the polling that's gone on for a couple of years. I knew that we were inheriting a pretty negative situation that we were going to have to address." That's why she wanted three days in the country, "a long trip for a secretary of state," she said.

"I wanted to demonstrate that, look, we are not coming here claiming that everything we've done is perfect. I've admitted to mistakes by our country going back in time, but I've also reminded people that we've been partners and allies from the beginning of Pakistan's inception as a country. Pakistan has helped us on several important occasions, and we are very grateful for that. So let's begin to clear the air here."

Clinton also commented on Iran, as the United States seeks clarification on whether the nation will agree to a deal brokered by the International Atomic Energy Agency aimed at resolving a dispute about Iran's nuclear program. "I am going to let the process play out, but clearly we are working to determine exactly what they are willing to do," Clinton said.

The secretary made a vow to Israeli and Palestinian leaders during the CNN interview as well. "We're going to do everything we can to try to clear away whatever concerns that the parties have, to actually get them into negotiations where they then can thrash out all of these difficult issues," she said.

"I think I'm pretty realistic about what has to be overcome for there to be the level of acceptance that is required to get into these negotiations," she added. "But remember, prior to negotiations, people stake out all kinds of positions, and then in the caldron of actually getting down to specifics, that all begins to be worked out."

She referred to the experience of former President Bill Clinton. "I watched in the '90s as my husband just kept pushing and pushing and pushing, and good things happened. There wasn't a final agreement, but fewer people died, there were more opportunities for economic development, for trade, for exchanges. It had positive effects, even though it didn't cross the finish line. So I think that being involved at the highest levels sends a message of our seriousness of purpose."