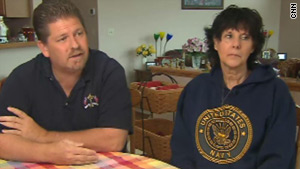 Chuck and Jeanne Lane saw their monthly credit card bill more than double even though they have excellent credit.
STORY HIGHLIGHTS
RELATED TOPICS

Washington (CNN) -- Chuck and Jeanne Lane got some good news earlier this week: After more than doubling the Lanes' monthly minimum payment, their credit card company is now slashing their payment.

The Ohio couple was featured in a CNN story about credit card companies jacking up rates in advance of a law going into effect that would prevent them from doing that. Because of the story, the couple says their bank agreed to give them relief:

Chuck Lane told CNN that he'll now be able to afford surgery for his wife and college for his son. But he worries about others: "I really don't want to gain because CNN's come and done a story on me when there's millions of others. I want it to be right for all of us."

The Lanes are one of millions of families who saw their credit card bills skyrocket after Congress passed a new law that would rein in credit card fees and rate changes. The law doesn't fully take effect until February 2010.

Joe Ridout, an advocate with Consumer Action, says that in the meantime, "It's really touched off a chase to the bottom" among credit card companies.

Some members of Congress are making a modest effort to change credit card practices immediately. After CNN's story aired, Rep. Betty Sutton, the Lanes' congresswoman, prodded the bank to make the Lanes a new offer.

Now she's trying to extend the help to others, introducing a bill Thursday that would ban fees on people who don't carry debt -- those who don't use their card or those who pay off their balance every month.

"Our work is not done," Sutton told CNN, "It's clear with the credit card companies ... it's always some excuse out there for hammering the American consumer, and it has to stop, so our work in Congress continues."

Rep. Betsy Markey, who said she was "outraged" after seeing the story on the Lanes, has introduced a Credit Card Rate Freeze Act that would halt any increases in credit card interest rates before new regulations go into effect.

"Credit card companies are just blatantly increasing rates solely because they know once the law takes effect, they won't be able to do this anymore," she said.

Sen. Mark Udall has introduced a similar bill in the Senate. And there's yet another bill that would move up the date when new the credit card law takes effect.

But none of these three bills is close to becoming law. And in the meantime, cardholders are being squeezed.

According to a new study by the nonprofit Pew Charitable Trusts, 12 of the nation's largest banks are adding fees and rate changes that will be illegal when the new law goes into effect. All of the banks in Pew's survey have raised interest rates, and 90 percent have jacked up late fees or made other changes that, in the words of the study's authors, are "likely to cause substantial monetary injury to consumers."

Nick Bourke of the Pew Credit Card Project offers this advice for consumers who see their card payments increase:

First, call the card company; then call your member of Congress because, Bourke says, "Congress could act right now" to stop those practices. And finally, he said, "You should also ask your congressman to ask what the Federal Reserve is doing because they have a lot of responsibility under this bill to protect people, and they should use that responsibility. "

The credit card banks think the criticism is unwarranted.

Scott Talbot of the Financial Services Roundtable, the lobby that represents the credit card companies, said the companies are operating in a tough environment because "credit card lending is the riskiest type of lending." He insisted that rising interest rates are directly connected to the state of the economy.

Companies are working to balance competing needs, Talbot said, "to ensure that customers have the credit they need and the companies have a viable business model going forward."

But Sutton doesn't think the banks are striking that balance.

"This is not the way it should be after the American people came to the rescue of the banks," she said.