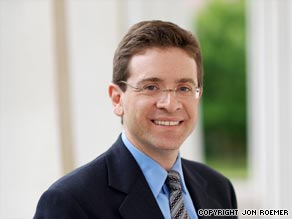 PRINCETON, New Jersey (CNN) -- During the recent interview that Massachusetts Sen. John Kerry gave to CNN, the chairman of the Foreign Affairs Committee argued that it was still too early for the United States to commit more troops to Afghanistan.

"It would be entirely irresponsible for the president of the United States to commit more troops to this country, when we don't even have an election finished and know who the president is and what kind of government we're working ... with," Kerry told CNN's John King.

The decision about Afghanistan could become a defining moment for the administration and the Democratic Party. As the White House deliberates about what to do, it is under pressure from Republicans who are criticizing Obama for not reaching a decision.

On CBS News, Texas Sen. John Cornyn said that "At some point deliberation begins to look more like indecisiveness, which then becomes a way of emboldening our enemies ... and causing our allies to question our resolve."

On her Facebook page, Sarah Palin wrote, "Now is not the time for cold feet, second thoughts, or indecision -- it is the time to act as commander-in-chief and approve the troops so clearly needed in Afghanistan."

These kinds of political attacks won't go away. Indeed they will only intensify in the coming months. Congressional Democrats will find themselves in a difficult position.

On the one hand, there will be a strong political temptation to stand firm behind whatever the White House wants in order to maintain a united front. On the other hand, some Democrats will want to question and keep open pressure on the White House.

On Capitol Hill, Kerry finds himself in a crucial position to shape this debate within the Democratic Party. It is fitting that he entered into the national spotlight in 1971 when, as a Vietnam veteran, he testified before Sen. William Fulbright's Foreign Relations Committee. During these hearings, he uttered the famous question: "How do you ask a man to be the last man to die for a mistake?"

Fulbright, who chaired Foreign Relations from 1959 to 1974, remains a model to many legislators of congressional activism on decisions of war and peace. One way in which the memory of Fulbright could shape Kerry's tenure is by reminding him of the importance of acting as the critic and the skeptic during times of one-party dominance of government.

In addition to the hearings where Kerry appeared, Fulbright conducted famous hearings as early as 1966, where he was one of the first legislators to openly challenge the policies of President Lyndon Johnson's administration, grilling administration officials like Dean Rusk about their decisions and conduct in Vietnam.

But there was another part of Fulbright's legacy that Kerry and other congressional Democrats should also remember, one that Kerry should avoid and a role that will be tempting as the president's opponents intensify their attacks.

This was Fulbright in 1964, the loyal partisan who put aside his deep reservations about American involvement in Vietnam to help Johnson push the Gulf of Tonkin Resolution through the Senate in August.

The Gulf of Tonkin Resolution was a critical step in the escalation of the Vietnam conflict. The resolution granted Johnson broad authority to take military action if necessary; Johnson compared it to "grandma's nightshirt" because it covered everything.

Fulbright had been extremely critical in 1964 about American foreign policy. In a famous speech on March 25, he called on Americans to consider "unthinkable things" and rethink what were seen as "self-evident truths" about the Soviet Union, China and other parts of the country. "We are clinging to old myths in the face of new realities," he said.

During these months, there were many Democrats such as Sen. Frank Church of Idaho on the left and Sen. Richard Russell of Georgia on the right who were telling the president in private that war in Vietnam would be a huge mistake: a military operation that could bog down American troops for years and a war that was not essential to containing the Soviet Union and China.

The conservative Southern Democrat Sen. George Smathers of Florida told Johnson that he could not find almost any colleague in Congress who thought "we ought to fight a war in that area of the world."

Johnson met with Fulbright and asked him to support the resolution regardless of his concerns. He assured Fulbright that he would not misuse the authority and argued that responding to the alleged attacks on U.S. ships was essential for the upcoming election. Republican Barry Goldwater was attacking the administration, saying it was lying to the public about its intentions to increase the American role in Vietnam and also being too timid to use the force that was necessary to win.

Fulbright agreed to support Johnson. On the floor, many senators were very dubious about granting this extension of power. They worried that it would be misused and feared the possibility of war.

Fulbright assured them that the president would approach Congress if he wanted to increase U.S. involvement in Vietnam and that, most importantly, this was needed to give Democrats cover from Republican attacks that Johnson and the party were weak on defense. Goldwater, he said, would undoubtedly bring the nation into war, so everything possible had to be done to stop him.

The arguments were convincing. The Gulf of Tonkin resolution passed with only two dissenters.

Fulbright would forever regret his decision, later admitting that political considerations led him to the wrong path. In a best-selling book published in 1966, Fulbright would explain the "mistake" that he and his colleagues in Congress made.

In dealing with Afghanistan, Kerry and his fellow congressional Democrats must act more like the Fulbright of 1966 than of 1964. This does not mean they should oppose or support military force, but they must not refrain from asking hard-hitting questions.

As Democrats start to think more about 2010 and 2012, and the political pressures intensify to prove that they are tough on defense, congressional Democrats must maintain the role of the watchdog, questioning and interrogating a White House that is under the control of their own party.

Kerry has often shown a proclivity toward making decisions based on political calculations and he has been extremely loyal to Obama throughout the 2008 campaign. Now his role has changed and the costs of blind loyalty are rising. Democrats must keep Obama's feet to the fire and do everything possible to make certain that Congress does not give a blank check to the White House to wage a bigger war.

All About Afghanistan War • John Kerry