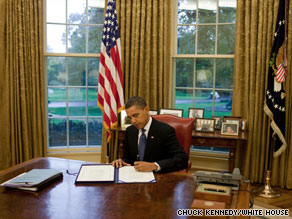 President Obama signs the Enhanced Partnership with Pakistan Act of 2009 in the Oval Office on Thursday.

The aid guarantee comes as the Pakistani government combats a wave of attacks believed to have been orchestrated by Taliban militants and as the Obama administration works on a comprehensive review of U.S. strategy in both Pakistan and neighboring Afghanistan.

"This law is the tangible manifestation of broad support for Pakistan in the U.S.," the White House said in a statement on Thursday.

The act bolsters a partnership "based on a shared commitment to improving the living conditions of the people of Pakistan through sustainable economic development, strengthening democracy and the rule of law, and combating the extremism that threatens Pakistan and the United States," it said.

On Wednesday, the heads of foreign relations panels in the House of Representatives and Senate provided a written explanation of the aid bill, a response to Pakistani complaints that the United States was meddling in its affairs.

Qureshi rushed back to Washington this week to report on opposition inside the Pakistani Parliament to the five-year package of nonmilitary aid. Some Pakistani politicians said the aid bill was a U.S. attempt to micromanage Pakistan's civilian and military affairs.

"Everyone is on the same page," Kerry said. "We are all clear about the intentions of the legislation."

Kerry argued the bill "demonstrates the American people have a long-term commitment to the people of Pakistan."

Qureshi replied, "This document, which I think is an historic document, is a step forward in our relationship."

Kerry said the explanatory statement attached to the bill emphasizes that no interference is intended with Pakistan's civilian or military operations. The statement said the bill establishes a variety of requirements meant to ensure U.S. efficiency and compliance but places no new conditions on the Pakistani government.

"The many requirements of this report are intended as a way for Congress to assess how effectively U.S. funds are being spent, shortfalls in U.S. resources that hinder the use of such funds and steps the government of Pakistan has taken to advance our mutual interests in countering extremism and nuclear proliferation and strengthening democratic institutions," the statement said.

"There is no intent to [establish], and nothing in this act in any way suggests that there should be, any U.S. role in micromanaging internal Pakistani affairs, including the promotion of Pakistani military officers or the internal operations of the Pakistani military."

Berman said the statement is "a reflection of our desire to be long-term partners with the Pakistan people."

Relations between the two governments, however, are being tested by new violence in Pakistan. On Thursday, militants launched a string of attacks that killed at least 30 Pakistani police officers and civilians, Pakistani authorities said. At least 10 attackers also died, while others were missing.

Watch a rundown of the day's violence »

About a half hour after the trio of attacks, a suicide car bomber hit a police station in the Kohat district of northwestern Pakistan, killing at least 11 people -- eight civilians and three police, said Kohat Police Chief Dilawar Bangish. A dozen people were wounded.

In a fifth attack, in Peshawar, a remote control bomb exploded inside a car parked in front of an apartment building. A hospital official said an 8-year-old boy was killed, and eight people -- four women, two men and two children -- were wounded.

At least 41 people were killed and 45 were wounded in a blast Monday at a security forces checkpoint in northwest Pakistan. The explosion occurred in the Shangla district in the volatile Swat Valley.

The attacks show "once again that the militants in Pakistan threaten both Pakistan and the United States," White House deputy press secretary Bill Burton said Thursday.

Obama "has been impressed by some of the courageous actions that the Pakistani military has taken to root out some of these extremist elements," he added.

All About Pakistan • John Kerry • The Taliban