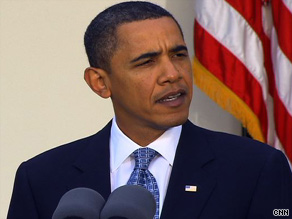 "Now's not the time to pat ourselves on the back," President Obama says at the White House on Tuesday.

Among other things, it would cap annual out-of-pocket expenses and prevent insurance companies from denying coverage for pre-existing conditions.

The plan is financed by a combination of reductions in spending for Medicare and other government programs, as well as higher taxes on expensive insurance policies and new fees on the health industry.

The committee passed its long-awaited plan Tuesday with a 14-9 vote. Sen. Olympia Snowe, R-Maine, was the lone committee member to cross party lines, breaking with other Republicans to vote for the measure. All the committee's Democrats supported the bill.

Watch why there was applause after the vote »

The Finance Committee was the last of five congressional panels to consider health care legislation before formal debate begins in the full House and Senate.

"We are now closer than ever before to passing health reform, but we're not there yet," he told reporters in the White House Rose Garden. "Now's not the time to pat ourselves on the back."

Instead, he said, it is time to "dig in and work even harder to get this done."

Obama singled out Snowe "for both the political courage and the seriousness of purpose that she's demonstrated throughout this process."

Democratic leaders in each chamber have now started the politically delicate task of melding together five pieces of legislation -- two in the Senate and three in the House.

Last week, the nonpartisan Congressional Budget Office estimated the Finance Committee's bill would cut the national deficit by roughly $80 billion over the next 10 years while expanding coverage to 94 percent of the country's non-elderly population.

"Ours is a balanced plan," said committee Chairman Max Baucus, D-Montana. "Now is the time that will tell whether things are merely said, or whether something is actually done. Now is the time to get this done."

Iowa Sen. Charles Grassley, the committee's top Republican, said he wished he "felt better about the substance of the bill," which is "moving on a slippery slope to more and more government control of health care."

Snowe indicated she has concerns with several aspects of the bill, but didn't want to see the reform process derailed.

"Is this bill all that I would want? Far from it," she said. "Is it all that it can be? No. But when history calls, history calls. And I happen to think that the consequences of inaction dictate the urgency of Congress [taking] every opportunity to demonstrate its capacity to solve the monumental issues of our time."

On Monday, an insurance industry trade group questioned several of the assumptions underpinning the bill. America's Health Insurance Plans released a report stating that, if enacted, the bill would increase premiums for families by an extra $4,000 by 2019. It said premiums for individuals would rise by an additional $1,500.

The analysis, conducted by the firm PricewaterhouseCoopers, threatens to undermine Obama's assertion that it is possible to expand coverage while slowing the rate of medical inflation.

A Finance Committee spokesman slammed the analysis, calling it "a health insurance company hatchet job, plain and simple." Snowe said it was "surprising" the insurance industry "would issue that kind of condemnation when you are trying to create a constructive approach" potentially worth billions of dollars to private companies.

The committee's plan, initially drafted by Baucus, is the only one under serious consideration that excludes a government-run public health insurance option. Several top Democrats, including House Speaker Nancy Pelosi, have questioned whether it is possible to contain costs without creating a public option to serve as a check on private insurers.

Republicans and some conservative Democrats oppose the government-run insurance option, saying it would drive private insurers from the market and eventually bring a government takeover of the health care system.

Baucus has said the more conservative Senate lacks the votes to pass a public option; Pelosi has repeatedly insisted the more liberal House will pass a bill that includes one.

The Finance Committee plan was partly the result of months of negotiations between Baucus and five other panel members -- three Republicans and two Democrats. The proposal from the "Gang of Six" has been widely viewed as the only one with the potential of attracting any Republican support.

The vote came after the committee spent two weeks debating 130 amendments. Committee members boosted the bill's overall price by more than $50 billion in part by expanding insurance subsidies for individuals and families with lower incomes.

They also voted to exempt senior citizens from higher taxes on medical expenses.

The sweeping bill would be paid for in part by cutting spending on several health care programs -- including Medicare -- by roughly $400 billion. Another $200 billion would be generated by imposing a new tax on high-end health care policies, dubbed "Cadillac" plans by critics.

At the same time, new fees would be imposed on drug and insurance companies, medical device manufacturers and other industries tied to the health care sector.

Individuals would be required to purchase coverage or face a fine of up to $750.

Senate Majority Leader Harry Reid's goal is to emerge with a single bill that can overcome a potential filibuster by winning at least 60 votes in the Senate. He wants to meet Obama's goal of designing a bill that will cost no more than $900 billion over the next decade.

Senate aides expect that effort to take a couple of weeks.

Joining Reid in the decision-making will be Baucus; Sens. Christopher Dodd of Connecticut and Tom Harkin of Iowa; senior Democrats on the Health, Education, Labor and Pensions Committee; and Rahm Emanuel, the White House chief of staff.

Other key senators -- including Snowe, one of the Gang of Six -- are also expected to be involved.

Aside from wrestling with the public option, Democratic leaders have to resolve sharp differences over how to pay for a reform plan. Top House Democrats oppose a tax on high-cost policies, which they fear would affect many union members. They have instead proposed a tax surcharge on individuals with annual incomes over $500,000, or families earning more than $1 million.

To get a bill passed, Reid could implement a legislative option known as reconciliation, which would require only 50 votes instead of 60. However, Republicans have promised a "minor revolution," in the words of GOP Sen. Lamar Alexander of Tennessee, if Democrats resort to that rarely used tactic.

Republican leaders, who have criticized the various Democratic plans for their size and scope, won't be involved in the upcoming negotiations. One senior Republican leadership aide recently quipped that she would be in her office with her feet on her desk during the talks because she wasn't going to be invited to offer suggestions.

If the House and Senate manage to pass health care reform bills, a conference committee would then negotiate a final version requiring approval from both chambers before going to Obama for his signature.