(CNN) -- The 1994 elections were approaching, and House Republicans were on a mission to take control of their chamber for the first time in nearly 50 years. 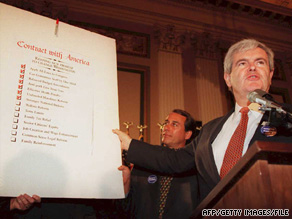 A clear message and strong leadership helped the Republicans pick up big wins in the 1994 election.

Buoyed by an electorate skeptical of then-President Clinton after his unsuccessful push for health care reform, Republicans charged forward with what experts say they are lacking now: a clear message and a leader.

With Newt Gingrich at the helm of a legislative agenda called the "Contract with America," Republicans handed Democrats a blistering defeat, taking back control not only of the House, but the Senate, too.

For 10 of the next 12 years, Republicans held the majority in both chambers. By the end of the bruising 2006 and 2008 election cycles, the Republicans found themselves back in the wilderness.

Exit polls from the 2006 election indicated views of President Bush and the war in Iraq were key to the outcome. By the 2008 election, even Republican presidential candidates were trying to distance themselves from Bush.

In the year since the last election, the Grand Old Party has made a handful of attempts to give itself a makeover, but all have stagnated. Now, the fractured party finds itself trying to regroup as the 2010 election cycle nears.

"The party is sort of in warlord status -- where different people are leading different fiefdoms, different warring armies that are frequently at war with each other," said John Avlon, author of books on independent and extremist politics.

The various factions have different ideas for the direction of the party, and they turn to different people to represent the voice of the GOP.

"Where the Republicans are having the biggest problem now is sort of a vacuum of leadership," said Republican strategist Chris Wilson.

Catch phrases, slogans and tag lines can change, Wilson said, "but what it gets down to is leadership, and it is all about who is seen as the leader of the party."

"It's not like you can just change one day the Republican brand from 'a to b' the way that Kentucky Fried Chicken tried to go from 'Finger lickin' good' to 'We do chicken right.' It just doesn't work like that," said Wilson, who has conducted thousands of public opinion surveys for candidates, companies and political groups.

Attempts to revive the Republican brand -- from Rep. Eric Cantor's "National Council for a New America" to Republican Party head Michael Steele's vow to launch an "off the hook," hip-hop infused PR campaign -- all failed to gain much momentum.

The reason, according to Avlon, is that the Republican Party tried to move forward without dealing with the mistakes of the recent past.

"The first step to recovery is admitting you have a problem. There are a lot of folks in the far right who do not want to admit they have a problem," said Avlon, author of "Independent Nation: How Centrists Can Change American Politics" and the upcoming "Attack of the Wingnuts: How the Lunatic Fringe is Hijacking America."

"They need to come to grips with what went wrong when they controlled both the White House and Congress, and why they were so repudiated by the American people in 2006 and 2008, and I don't think they've done that hard work yet," he said.

Some on the far right say the problem is that they weren't conservative enough -- an idea Avlon calls "self-evidently" crazy. History is clear about how parties come out of the wilderness, he said: by reconnecting with the center.

"But as long as the Republican Party is so angrily fixated on playing to its base and dividing to conquer -- they will become not only more ideologically isolated but more regionally isolated and that is the road to irrelevance," he said, adding that what he describes as an "obsessive hunt for heretics" in the GOP must stop.

The perceived lack of tolerance for diversity of opinion is a key obstacle preventing the Republican brand from gaining traction, said John Quelch, a marketing professor at Harvard Business School and co-author of "Greater Good: How Good Marketing Makes for Better Democracy."

"I think part of the problem that the Republicans have is that the base has, in many cases, certain litmus test issues on which they are black and white on their thinking," he said, pointing to abortion and gun rights as examples of issues that are elevated from debates over policy to attacks on a person's morals.

"If you think about it on the Democratic side, I don't think there are as many issues that are so clearly defined as litmus tests," he said. Related: Democrats' divisions 'par for the course,' experts say

Republicans have recently found a voice in criticizing Obama for not being able to deliver on a substantial portion of his agenda, but, going into 2010, that could end up helping the Democrats instead, Quelch said. "The fact that there hasn't been any major legislative success actually makes it harder for the opposition to galvanize."

Despite the damaged brand and back-to-back election cycle losses, there are glimmers of hope ahead for Republicans in Congress.

Support for Democrats has been on the decline, and a recent Gallup Poll suggests the parties are nearly tied in the midterm matchups.

Obama won over independent voters in the last election cycle, but many of those voters -- who are fiscally conservative and socially progressive -- have since been turned off by the administration's unprecedented government spending.

"That should create an opening for Republicans, but to do that they need to recognize that in part they lost their way by losing the mantle of fiscal responsibility, by growing deficits and squandering surpluses," Avlon said.

Going ahead, the GOP needs to moderate its extremes and clarify its message, he said.

"I think what they need to do is focus on what made them the party of Lincoln in the first place. They need to focus on the common ground items, being a party of national unity, national security, fiscal responsibility and individual freedom," he said.

As for Wilson, he's hopeful for the future. "The Republican Party as a whole is at the best point I've seen it in the last decade."

He's also confident Republicans can put forth a clear agenda to get the party back on track and shake the "Party of No" label prescribed by Democrats.

"For fair or for not, the proposals being pushed by the Obama administration have increasingly become very unpopular and so the American people have seen the Republicans being able to stop those unpopular proposals," he said.

The next step, he said, is "to move from stopping what's unpopular to moving to a positive agenda that's going to help people."

Asked how the party balances prevention with progression, Wilson replied, "That's the $64,000 question.

"You just have to work that much harder. I think you have to pivot, bottom-line."