WASHINGTON (CNN) -- They're angry and fighting back with full force. 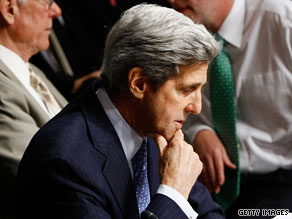 Sen. John Kerry, D-Massachusetts, is a member of the Senate Finance Committee.

The White House, Democrats and health care experts are blasting a new insurance industry trade report that finds that health insurance premiums for the typical American family would increase by $4,000 by 2019 under a key Senate overhaul plan.

The analysis by America's Health Insurance Plans indicates that under the Senate Finance Committee plan -- spearheaded by Democratic Chairman Max Baucus -- the costs of private health insurance would rise by 111 percent over the next decade.

Under the current system, costs would rise by 79 percent, the report said, and premiums for individuals could rise by an extra $1,500 if the Baucus plan is implemented. The report was conducted by the firm PricewaterhouseCoopers.

The committee passed the long-awaited $829 billion health care bill by a 14-9 vote Tuesday.

"Imposing new taxes and fees on health care services and on insurance flies in the face of the goal of reducing health care costs," Karen Ignagni, president and CEO of America's Health Insurance Plans, said on a conference call with reporters.

Finance Committee spokesman Scott Mulhauser called the analysis "a health insurance company hatchet job -- plain and simple." And Jonathan Gruber, a professor of economics at the Massachusetts Institute of Technology, disagreed with the report.

Gruber, also the director of the health care program at the National Bureau of Economic Research, says that Baucus' plan will deliver savings ranging from "several hundred dollars for the youngest consumers to over $8,500."

"This is in addition to all the other benefits that this legislation will deliver to those consumers -- in particular the guarantee, unavailable in most states, that prices would not be raised or the policy revoked if they became ill," he said in a report.

The Massachusetts Democrat said the analysis is "significantly flawed" and shows that the insurance industry is part of the health care problem, not the solution.

Wendell Potter, a former insurance company executive turned whistle-blower, said the report is aimed to shape reform "for their benefit and at the benefit of Wall Street shareholders, more than Americans."

"This is a desperation move on the part of the insurance industry, because analysts are now somewhat concerned ... that the bill may not be absolutely everything that the industry wants, and that's what's driving this -- Wall Street's expectations that this bill may not be everything they'd hoped and prayed for."

The report, meanwhile, came as a surprise to the White House, which had invited the industry to help negotiate health care reform earlier in the year.

"What they did here was exclude all of the features of the Senate Finance Committee bill that lower costs for all Americans," said Linda Douglass with the White House Office of Health Reform.

White House spokesman Reid Cherlin added that the report is inaccurate and self-serving.

"This is a self-serving analysis from the insurance industry, one of the major opponents of health insurance reform. ... It is hard to take it seriously."

The America's Health Insurance Plans analysis also took aim at a proposed tax on employer-sponsored, high-cost "Cadillac" plans. The report said they could result in higher premiums for many private consumers.

In a statement to CNN, the company that conducted the study said the report did not include other provisions that are part of health care reform proposals.

"The reform packages under consideration have other provisions that we have not included in this analysis. We have not estimated the impact of the new subsidies on the net insurance cost to households," PricewaterhouseCoopers said. "Also, if other provisions in health care reform are successful in lowering costs over the long term, those improvements would offset some of the impacts we have estimated."

So, what are the facts?

The budget office also pointed a finger at insurance companies, indicating that 23 percent of some premiums go to administrative costs.

But the Congressional Budget Office analysis showed that the Baucus bill would reduce the national deficit by slightly more than $80 billion over the next decade, provide insurance to an additional 29 million people and extend coverage to 94 percent of the country's nonelderly population.

"The idea that the insurance industry would complain about high premiums is like the Yankees complaining that they're hitting too many home runs. It's totally preposterous," said Richard Kirsch of Health Care for America Now, a reform group that says it represents more than 1,000 organizations in 46 states, involving 30 million people.

The insurance industry's report, meanwhile, also takes a swipe at the controversial public option -- the idea of giving the uninsured the choice of a government health care plan.

The public option is now backed by the nonprofit group behind Consumer Reports.

"We're very strongly in support of the public insurance option as an option because we think that you can't get health care costs down unless there really is true competition in the health insurance marketplace," said James Guest of Consumers Union.

"And they will, indeed, raise our prices, our premiums to the point that we can't afford them and more and more people will be in the ranks of the underinsured."