WASHINGTON (CNN) -- As thousands gathered Sunday in Washington for a march and rally focused on gay rights issues, lawmakers showed that some of the demonstrators' key goals face major obstacles ahead. 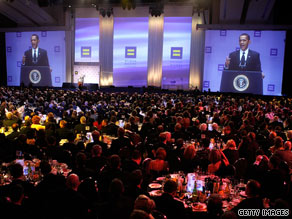 Even with President Obama pushing Congress to repeal the Defense of Marriage Act -- a stance he highlighted to one of the nation's leading gay-rights groups Saturday night, to huge applause -- members of his own party told CNN they're not in lockstep.

He added, "We can move forward on a lot of measures, but I'm not sure there's the support yet for that."

Sen. Debbie Stabenow, D-Michigan, noted that her state is one of many that has a law prohibiting same-sex marriage. "So I think, for a number of us, that becomes a challenge," she said.

Stabenow would not say whether she would vote to repeal the Defense of Marriage Act.

The law, signed by President Clinton in 1996, defines marriage as being between a man and a woman, and ensures that states do not have to recognize same-sex marriages performed in other states. Clinton has since changed his mind, and said he no longer opposes same-sex marriage.

Obama does not support same-sex marriage and has said he believes marriage is between a man and a woman. He does, however, support civil unions for same-sex couples that offer similar rights and protections.

The two Democratic senators on Sunday expressed support for the president's stances on several other key issues regarding gay rights, including legislation expanding the definition of hate crimes to include attacks based on sexual orientation and gender identity. The bill passed the House last week.

On NBC's "Meet the Press," Sen. Carl Levin, D-Michigan, said he thinks the president will succeed on that front.

"I think he will and he can, but it has to be done in the right way, which is to get a buy-in from the military, which I think is now possible," Levin said. "Other militaries in the West -- the British and other Western armies -- have ended this discriminatory policy. We can do it successfully, but it ought to be done with thoughtfulness, with care and with a buy-in from the military."

Retired Gen. Richard Myers, former chairman of the Joint Chiefs of Staff, said, "Gays can serve in the military; they just can't do so openly. And they do, and there are lots of them, and we're the beneficiary of all that."

But retired Army Gen. Barry McCaffrey disagreed. "There's no question that it's time to change the policy. The key to it isn't buy-in from the military; it's for Congress to change the law. They ought to do so, and I'm confident that the military will move ahead on it," he said.

Sen. Lindsey Graham, R-South Carolina, rejected McCaffrey's suggestion. "It's my belief that if you don't have buy-in from the military, that's a disservice to the people in the military. They should be included in this. I'm open-minded to what the military may suggest, but I can tell you I'm not going to make policy based on a campaign rally," Graham told NBC.

"If this policy about 'Don't ask, don't tell' changes, it should be done based not on politics, but on reason."

In his speech Saturday night to the Human Rights Campaign -- the nation's largest gay rights group -- Obama praised the gay community for making strides in equal rights and pledged to deliver on major campaign promises that critics say he's left on the back burner.

"For nearly 30 years, you've advocated for those without a voice," Obama said. "Despite the progress we've made, there are still laws to change and hearts to open."

All About Gay and Lesbian Relationships • Barack Obama • Same-Sex Marriage