WASHINGTON (CNN) -- Senior Catholic bishops are threatening to oppose the health care bill under consideration in Congress if lawmakers don't make significant reforms regarding federally funded abortions and other issues. 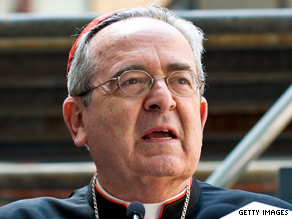 Cardinal Justin Rigali is one of three top Catholics who said the current health care bill is unacceptable.

"No one should be required to pay for or participate in abortion," the United States Conference of Catholic Bishops said in a letter Thursday to members of Congress.

The amendments were introduced by Sen. Orrin Hatch, R-Utah. They sought to explicitly state that the current ban on federal funding for abortions would apply to all aspects of health insurance in the bill and prohibit the government at any level from forcing hospitals, doctors and other health care providers to perform abortions.

Federal law allows government funding for abortions only in the cases of rape, incest or danger to a mother's health.

"We sincerely hope that the legislation will not fall short of our criteria," the letter says. "However, we remain apprehensive when amendments protecting freedom of conscience and ensuring no taxpayer money for abortion are defeated in committee votes."

The three also urge that health care reforms "make quality health care affordable and accessible to everyone," especially those who live around poverty level, and measures to safeguard the health of "legal immigrants and their family members."

"If acceptable language in these (three) areas cannot be found, we will have to oppose the health care bill vigorously," the letter says.

The vote represents a pivotal step forward in the contentious health care debate. The Finance Committee is the last of five congressional panels to consider health care legislation before debate begins in the full House and Senate.

All About Health Care Policy • The Roman Catholic Church