WASHINGTON (CNN) -- Leading Republicans urged President Obama to make a swift decision in favor of more U.S. troops for the war in Afghanistan after talks between the president and congressional leaders Tuesday. 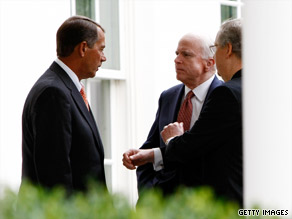 Top Republicans were at the White House on Tuesday to meet with President Obama.

Obama faces an expected request for thousands of more U.S. troops from Gen. Stanley McChrystal, the U.S. commander in Afghanistan. He gathered leading members of Congress from both parties at the White House on Tuesday afternoon to discuss the future of the war, which turns 8 years old Wednesday.

"Obviously, there are many of us who feel that delay does signal uncertainty to the region," Rep. Eric Cantor, the House minority whip, told CNN's "The Situation Room."

Cantor, of Virginia, said Republicans would support Obama if he agrees to send more troops into the conflict. But "If the president chooses to go a different route, you know, it is obviously going to be tough for us," he said.

Senate Majority Leader Harry Reid, D-Nevada, said after the meeting that "everyone -- Democrats and Republicans -- said, whatever decision you make, we'll support it, basically." But he expressed skepticism about Republican pledges of support, saying, "It will be interesting to see if their actions follow their words."

Watch more on the problems Obama faces on Afghanistan »

Privately, a top House Democrat told Obama that escalating the war could result in the United States being stuck in Afghanistan for another 20 years of open-ended conflict, according to Democrats and Republicans who attended the closed-door White House meeting.

Two attendees said Rep. David Obey, powerful chairman of the House Appropriations Committee, warned Obama that the United States could end up spending $1 trillion over the next 10 years in Afghanistan. Obama made clear to Obey and other fellow Democrats that pulling out of Afghanistan is not an option that's on the table, even though that is likely to anger some fellow Democrats, the attendees said.

Obey spokesman Ellis Brachman would not confirm or deny precisely what the congressman said in the private meeting.

U.S. forces launched the invasion of Afghanistan on October 7, 2001, in response to the al Qaeda terrorist network's attacks on New York and Washington on September 11.

Al Qaeda leader Osama bin Laden escaped the U.S. onslaught and remains a fugitive. Now the U.S.-led coalition is battling a resurgence of the Taliban, the Islamic militia that allowed al Qaeda to operate from its territory before the attacks and is trying to return to power.

Defense Secretary Robert Gates acknowledged Monday that Taliban fighters "have the momentum right now," blaming a shortage of U.S. and allied troops over the past seven years for the development.

The war has claimed the lives of 865 Americans and 570 allied troops, and U.S. public support for the conflict has slipped sharply in the past two years.

House Speaker Nancy Pelosi, D-California, said after the White House talks that Obama has "a difficult decision" before him but offered no overt pledge of support for more troops.

"Whether we agree with it or vote for it remains to be seen when we see what the president puts forth," she said.

But Sen. John McCain, the ranking Republican on the Senate Armed Services Committee, said, "It's pretty clear that time is not on our side."

During the meeting, the president dismissed efforts to define the debate as a choice between "doubling down or leaving Afghanistan" as a "straw man," according to an Obama administration official.

And participants said there was another dramatic exchange between two former presidential nominees -- McCain and Sen. John Kerry, the Democratic chairman of the Senate Foreign Relations Committee.

According to the participants, Kerry told Obama that whether to send more troops into Afghanistan was a "collective" decision, because lawmakers in both parties are prepared to help him sell it to the American people.

But McCain -- who campaigned in 2008 on the argument that he had more experience to make tough calls like this -- stood up to insist that ultimately, the commander-in-chief alone will take the heat.

When asked by a reporter after the White House meeting if this decision is a test for Obama as head of the armed forces, McCain said, "Of course it is, and I think the president is aware of it."

A spokesman for Kerry said the senator is "well-acquainted with his copy of the Constitution." But what Kerry said was once Obama reaches a decision, lawmakers "will stand collectively with the president in supporting that decision as representatives of the American people."

White House spokesman Robert Gibbs has said Obama would consult with Congress on his eventual decision.

"The president has [heard] and wants to hear from all of those that are involved in decisions about protecting our homeland, keeping our country safe, as well as the deployment of our men and women in uniform," Gibbs said. "Obviously, Congress plays an important and significant role in that, and this is part of talking to them about this process."